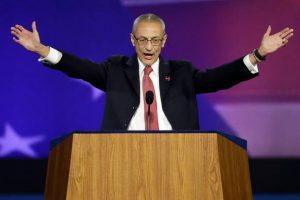 I would like to outline oddities that I have noticed in connection to the recent New Zealand terror attack and the presence of John Podesta until 24 hours before the tragic event. Only seven days earlier, Hillary Clinton’s former presidential campaign manager was in New Zealand where he appeared in a T.V. interview conducted by Newshub, as the victim of “The world’s most notorious political hack.” At the end of the interview John Podesta was said to remain in New Zealand to preside over what was described as “A Global Progressives Event.”

The event was called “The Path to Progress” :

However, in the same interviewJohn Podesta also said that New Zealand is a “big juicy target.”

Can this only be a coincidence or is there a macabre synchronicity connected with this tragic event? Only days after Podesta called New Zealand a “big juicy target” we have the Christchurch shooting.  During the same interview he also said that hacked information could be weaponized as fake news, and stated that, “Vladimir Putin must be sitting in the Kremlin saying this is the best return on investment I ever got – I’ve got a pliant President of the United States.”

Clinton’s manipulative campaign manager, John Podesta, working with the Vatican Illuminati as outlined with evidence in my latest book Confessions of an Illuminati Vol.6.66, said in the same interview that aired on the 7th of March 2019,  that we should all be “very worried” by Russia and China. Strangely enough, they are two countries he and his brother and business partner Tony love very much. Tony Podesta even made $500K lobbying for a Chinese firm convicted of illegal sales to Iran, and Podesta’s business dealings in gas, aluminum, uranium, and his banking in Russia, have often been pointed out.

John Podesta, who left for Australia the day before the “terrorist attack” occured, praised the “superstar” Prime Minister Jacinda Ardern saying to the press that: “She’s made an impression on the world. She’s somebody that people are paying attention to. “Wow! You have our attention, as the cowardly acts of the New Zealand Mosque Massacre demonstrated to the world the biggest failure in the intelligence and security apparatus of the country, or a deliberate attempt to start a clash of civilizations. Something is fishy about Podesta’s presence in New Zealand, remember he is an agent of the Illuminati and an asset of Jesuit and Vatican intelligence.

9 thoughts on “What was John Podesta doing in New Zealand until the day before the Mosque Shootings?”