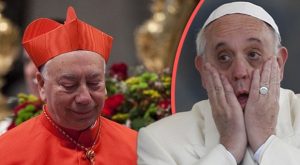 Now it seems that Cardinal Coccopalmerio himself was present at the drug-based gay party, a high-level Vatican source with direct knowledge of the events, who must remain anonymous for fear of reprisals, confirmed to LifeSiteNews, and that the Pope himself was aware of the presence of Coccopalmerio at the disgraceful party.