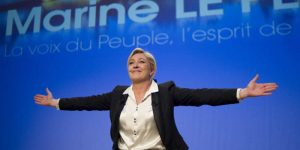 The French court has ordered Marine Le Pen to submit to a psychiatric evaluation as part of an investigation into her post on Twitter of  images of Islamic State executions.

The French conservative leader denounced the initative on Thursday, while referring to the present French “regime”as “worrying.”

Le Pen was ranked among the most influential people in 2011 and 2015, by Time100. In 2016, she was ranked by Politicoas the second-most influential MEP in the European Parliament, after President of the European Parliament Martin Schulz. French politician and lawyer Marine Le Pen is currently serving as President of the National Rally political party (previously named National Front) since 2011, was shocked after receiving notice of a psychiatric evaluation ordered by a French court.

“It is very serious and I do not deny that I am starting to find this regime in which we live in worrying. Of course I do not intend to undergo the psychiatric examination and I am waiting to see how the magistrate intends to force me to do it “.

The controversial investigation relates to three graphic images of Islamic State executions Le Pen posted on Twitter in 2015, including the beheading of American journalist James Foley. The tribunal stated that the assessments were a normal part of such probes but this is clearly a sign of things to come in the world of contemporary censorship and politics, mining further the freedom of expression and the rebuilding of Le Pen’s party after her loss to the “Toy Boy” of the New World Order President Emmanuel Macron, in the second round of a tense election last year.