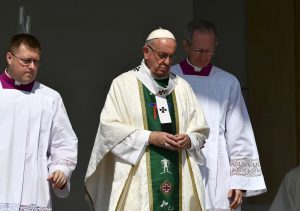 After the mass resignation of the Chilean bishops that I wrote about earlier this year, today the Chilean national prosecutor has enrolled 158 members of the Catholic Church in the register of suspects for committing or covering-up sexual abuse against minors and adults.

This is a real catastrophe for the Vatican, obscuring the Catholic church once again, in the eyes of the world. Among the suspects of this massive child abuse case in Chile (either as protagonists or accomplices)  are a large number of bishops, priests and lay people connected to the Church, and these cases go back almost 60 years.The Chilean magistrates have, in fact, opened 144 lines of investigations on cases from 1960 until today, with 266 victims involved.  Of these victims, 178 were children or teenagers and 31 were adults. “The overwhelming majority of the reported facts correspond to sexual crimes committed by priests, parish priests or people associated with schools”, the prosecutor’s office in Chile wrote today. The age of victims was not established in 57 other cases.

The avalanche of sex abuse and cover-up cases that have recently fallen on Chile’s Catholic Church pushed Pope Francis earlier this year to publicly denounce a “culture of abuse and cover-ups”after he himself ignored the crimes of his clergy for years, originating from a country that Bergoglio knows particularly well, as it is a neighboring country to his Argentina.

The sex scandal in Chile is especially damaging to the Pope as it has revealed that he lied about knowing the extent of the damage, even denying that he had been sent a letter from victims begging him for help. You may recall that Pope Francis met with one of the victims afterward, and told him that it was “OK to be gay” which sparked global backlash.

Once again, this demonstrates that when Pope Benedict stepped down from the papacy in 2013, it was not a random event. He had covered up the dramatic situation in the Catholic Church for years, irremediably  compromised by economic scandals and rampant pedophilia,  involving a much larger number of clergy around the world than previously thought.

At the moment, what is even bigger than the child molestations by the Catholic Church, are the years of coverups by the Vatican. Certainly decades of abuse could not have existed without Vatican officials knowing about it.

In the meantime, McCarrick, the 88-year-old retired archbishop of Washington, was ultimately kicked out, when Francis ordered him on June 20th to be removed from public ministry. The sanction was issued pending a full investigation into a “credible” allegation that he fondled a teenager more than 40 years ago in New York City. The Catholic dioceses of Newark and Metuchen, N.J., revealed that they had received three complaints of misconduct by Cardinal McCarrick against adults and had settled two of them.

In October 2013, McCormick gave a speech at Villanova entitled, “Who is Pope Francis.” During the talk, McCarrick shared a conversation that he had with the newly elected Pope Francis. McCarrick told the audience that he had a very serious cardiac incident while he was at the Vatican during the 2013 Conclave. When he returned from the hospital to the seminary where he was staying, his phone rang and it was the newly elected Pope Francis on the line, inquiring about McCarrick’s health. McCarrick relayed his conversation with Pope Francis: “I told the Pope that I guess the Lord still has some work for me to do.”The Pope responded to McCarrick by saying, “But on the other hand, maybe the Devil did not have your accommodations ready.”

Now we know the Pope was not joking as McCarrick is truly a Satanist and a pedophile who deserves hell. The 40-year movement to legalize sexual interaction with children is growing more and more. People are publicly advocating without shame that: “I’m a pedophile, but not a monster;” and, “pedophilia can be justified by sexual orientation” and is something that clearly shows the rise of the demonic side inside the Church and in the world of politics, especially left-wing politics in favor of liberalizing pedophilia. Remember Jesus warned his disciples, “It would be better for you if a millstone where hung around your neck and you were thrown into the sea than for you to cause one of these little ones to stumble” (Luke 17: 2).

IMPORTANT UPDATE: Eventually Pope Francis accepted the resignation of former Cardinal McCormick from the College of Cardinals on July 28, 2018, after a series of sexual misconduct allegations.