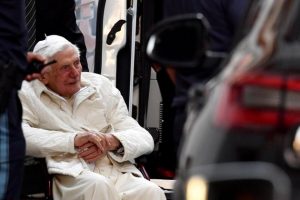 On Thursday we saw images of a very weak Pope Emeritus leaving Rome probably for the last time to officially visit his seriously ill older brother, but Benedict XVI may have left the Vatican forever says Bild the famous German newspaper published by Axel Springer SE.

The resignation of Pope Benedict XVI occurred on February 28, 2013 at 20:00 CET, which was announced by him directly on the morning of  February 11, 2013, and ever since then Joseph Ratzinger has remained in Italy. The plane that brought Ratzinger back to his native Germany today was an Italian Airforce 3131 military plane that departed from Ciampino at 10.52 and arrived in Munich at 12.07.

Ratzinger’s entourage in Germany includes his secretary Monsignor Georg Gaenswein (who some say is his lover), the number two of the Vatican Gendarmerie, a trusted member of the Knights of Malta, a nun, a doctor, and a nurse. Ratzinger decided to see his brother despite the contrary opinion of his doctor, to escape the strict Jesuit control that he has been subject to in the last few months.

The official Vatican spokesman Matteo Bruni said that Pope Ratzinger will certainly remain in Germany for some time. Upon his arrival in Munich, the Pope Emeritus was immediately greeted by nurses from Malteser International, the health organization of the Order of the Knights of Malta who seem to want to defend Pope Benedict XVI after their own Grand Master Fra’ Giacomo dalla Torre del Tempio di Sanguinetto, a Jesuit agent, died under mysterious circumstances on the 29th of April 2020 after his predecessor was controversially forced out by the Pope in 2017. Initially, Sanguinetto was said to have died of Covid-19 but later the Vatican for some strange reason changed their version saying he died of throat cancer.

However, it seems like Pope Ratzinger was fed up by the total isolation imposed on him in the last few months by the Jesuits and Pope Francis that I have previously reported on leozagami.com, and as soon as he heard of the worsening conditions of his brother he immediately asked his loyal Knights of Malta, now free of Jesuit control after the death of Sanguinetto, to help him get out of the Vatican alive so he can live for the remainder of his life, in freedom.