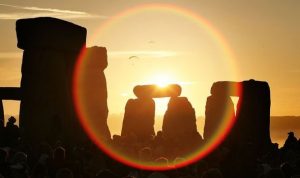 Protests that were supposed to be rallies of concerned Americans that were horrified by the death of George Floyd quickly degenerated into riots that destroyed parts of American cities whose economies were already ruined by the CCP virus plandemic. The New World Order capitalized on the events to present the next stage of the One World Government agenda.

Mercenaries of the elite have used the occasion to bring together libtard intellectuals, ecologists, socialists, feminists, LGBT activists, pro-abortion advocates, and others to push once again their false class struggle narratives upon the American public in a last desperate attempt to sabotage the re-election of President Donald J. Trump. Satanists and witches are participating by openly invoking evil to aid those participating in the violence.

The anti-Trump witches of today do not hide their involvement in the violent protests led by BLM and Antifa. Mashable reports that witches’ covens have been actively engaged in hexing police who they constantly accuse of brutality. They target, in particular, those who are risking their lives to stop the riots. The witches also cast spells asking for protection for protesters that confront the police. Witch activists are using their dark arts as cutting-edge weapons for those who want to engage in more spiritual class warfare and they want to create a dark side to Summer solstice 2020. They will be working on Solstice spells and rituals to stop (in their foolish eyes) our great President Donald J. Trump.

The summer solstice is the year’s longest day, the beginning of summer, and an annual occasion steeped in pagan tradition. A solstice is an ideal occasion for the dark side of the Illuminati to set intentions and plans for the rest of the year. During this extraordinary solar eclipse, we might even see Luciferians openly marching in cities all over the U.S.: https://spiritdaily.org/blog/news/pray-this-away-luciferians-to-march-on-cities

There will also be for the first time ever a worldwide Livestream of the Stonehenge druid ceremonies used by the Illuminati elite. While the usual in-person gathering is conveniently on hold, you’ll be able to live stream at sunset today on June 20 and sunrise on June 21 from Stonehenge on the English Heritage’s Facebook page.

“All druid rituals have an element of fertility, and the solstice is no exception,”King Arthur Pendragon, a senior archdruid, told CNN adding “We celebrate the union of the male and female deities — the S\sun and the Earth — on the longest day of the year.”

As lawlessness and chaos continue to manifest throughout the U.S. and now in multiple places worldwide, believers need to rise up and pray because this year’s summer solstice coincides with a rare and unusual solar eclipse event that will be used by black magicians to cast a dark spell on world events. The Satanic Illuminati are said to be planning the sacrifice of many children worldwide at the precise time when the sun, moon, and Earth align in the sky on Sunday in this rare “ring of fire”solar eclipse, that is timed perfectly to coincide with the summer solstice, the longest day of the year. The eclipse will be visible across swaths of Africa and Asia, but not in the United States — although it will be live-streamed on TimeandDate.com and other sites.

It is time to pray and counteract this evil at exactly the same time as the eclipse with an equally powerful prayer chain of Christian believers. Turning to God for protection and healing against Satan’s evil plan now more than ever is an important necessity.

We are reminded by the LORD that “our struggle is not against flesh and blood, but against the rulers, against the authorities, against the powers of this dark world and against the spiritual forces of evil in the heavenly realms.” (Eph 6:12.)