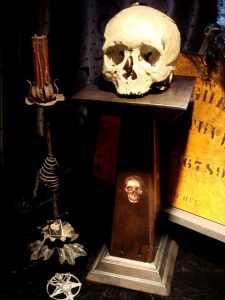 For almost a decade I have been investigating the disappearance of Emanuela Orlandi, and talked about it extensively in my book, Volume 3 of Confessions of an Illuminati, so when the mainstream media began talking about about a search of Emanuela’s bones in the last few weeks, I wasn’t surprised that some of my predictions would manifest.

In my article entitled, Human Sacrifice in the Vatican could be unveiled soon published on leozagami.com on March 4th, 2019, when the media wasn’t talking about it, wrote the following:

“This story is vaguely reminiscent of Dan Brown’s Angels & Demons, where it leads to an ancient tomb in the Teutonic cemetery inside the Vatican walls, linked to the possible death of Emanuela Orlandi, the Vatican citizen who mysteriously disappeared on the 22nd of June, 1983, never to be seen again. Finally, after the unsuccessful findings of last year, when human remains (still not identified) surfaced at the Apostolic Nunciature to Italy, some credible reports were received months ago by the lawyer of Emanuela’s family, that indicate that she could actually be in the Teutonic Cemetery, a burial site adjacent to St. Peter’s Basilica in Vatican City. “

I also added that: “This place is located where the Circus of Nero once stood during the period of the Roman Empire, and was the site of martyrdom for many  early Christians of the city.  Martyrdom in the early Christian era, represents to some extent, a direct extension of Roman death and purification rituals. Dying for a specific – and usually honorable – purpose, in the honor-shame society of the Roman Empire led to a new culture, religion, and of course, Imperial dynamic, that the Vatican seems to still want to reflect in some way by possibly placing the body of Emanuela there, hidden away to guarantee the very survival of the Church.”

Here is the full article:

Human Sacrifice in the Vatican could be unveiled soon

And another related article from last year:

After Vatican officials stated they found no evidence that Emanuela Orlandi, a Vatican citizen who disappeared 36 years ago, had been buried in the Teutonic cemetery inside Vatican City, a new foray on Saturday unearthed two ossuaries on that contained unidentified human bones, making headlines worldwide. Without quantifying the number of skeletal remains that had been found, Vatican officials immediately said in a statement that it was not possible “…at the moment to predict how long it will take to complete a morphological analysis of the remains found in the ossuaries.”

Usually an ossuary is a site made to serve as the final resting place of human skeletal remains when burial space is scarce or when it was required to get rid of certain remains in a more secretive  manner due their nature. Many examples of ossuaries found within Europe are often connected to a particular religious order, like the Santa Maria Della Concezione dei Cappuccini in Rome, that in 1631 ordered the remains of thousands of their Capuchin friars exhumed and transferred from the friary in Via dei Lucchesi to their nearby crypt.

There are other cases like the Cistercian monastery in Sedlec, a suburb of Kutná Hora, now in the Czech Republic, where most of the bodies came from a more dark background as a result of the Black Death in the 14th century the Hussite Wars in the early 15th century, butthere are even more macabre ossuaries being unearthed from time to time around the world.

“The Affair of the Poisons” (L’affaire des poisons) was a major murder scandal in France during the reign of King Louis XIV. Between 1677 and 1682, prominent members of the aristocracy were implicated and sentenced on charges of poisoning and witchcraft.  Authorities rounded up a number of fortune tellers and alchemists who, aside from selling divinations, séances, and aphrodisiacs, confessed to having sold poison to their clients who allergedy wished to get rid of their spouses or rivals in the royal court.

The most famous case was that of the midwife Catherine Deshayes Monvoisin or La Voisin, who was arrested in 1679 after she was incriminated by the poisoner, Marie Bosse. La Voisin implicated a number of important individuals in the French court that performed Black Mass rituals with her and a number of Catholic priests. Upon her arrest, investigators discovered the corpses of 2,500 infants buried in her own personal ossuary in heryard. It was said that La Voisin had paid prostitutes for their infants for use in the rituals.

Ossuaries and the power of bones are still considered of great importance today by the Catholic Church, but also by Black Magicians operating in the Illuminati network often aided by the Jesuits. They even have the feast day of St. Cyprian and St. Justina celebrated each year on the 26th of September to offer the bones of a black cat in honor of this enigmatic and precious saint, the patron of necromancy. There is great interest for the Illuminati elite, especially in the practices of Obeah (sometimes spelled Obi, Obeah, Obeya, or Obia) a system of spiritual and healing practices developed among enslaved West Africans in the West Indies.

Of all the Living Traditions, Obeah has remained the most elusive whilst Vodou and Santeria, that are quite similar but definitely not the same, have had both academic and occult interest in a variety of books widely available to the seeker. Obeah has managed to remain uncompromisingly rooted as a sorcerer’s tradition veiled in obscurity and something the Illuminati continue to find of great interest.

Known Satanist and Illuminati Nicholaj de Mattos Frisvold, whose dark activities connected to the Vatican Jesuits have been exposed extensively in my books, has for example, published a book in 2014, entitled Obeah: A Sorcerous Ossuary.Frisvold opens this Caribbean mystery of the Illuminati by revealing the crooked Black Magic path into the hidden world of such dark figures such as Papa Bones and Sasabonsam, with a short monograph concerning the history of this seemingly incoherent cult and the ways in which power is bestowed upon and wielded by the Obeahman using human bones.

“They found thousands of bones,” said Giorgio Portera, the Orlandi family’s forensic expert, who hypothesized that they belonged to “dozens of persons.” He said the bones had not been catalogued or kept in an orderly manner, but were “piled up in a cavity.” On Saturday, all the bones were gathered into 24 bags and sealed, so let’s wait and see what will happen next.

I still think that the most strange occurance is when officials entered the Teutonic Cemetary on July 11 and opened the two tombs identified as possible repositories for Emanuela’s remains and found abslutely nothing. Not even the bones of the two princesses who were supposed to have been buried there were present. Sounds like those bones were too important to be buried there, so let’s see if these two osseries will unveil any bones of children aside from Emanuela Orlandi’s.