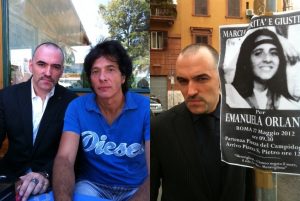 This is news I report with a great sense of sorrow, especially because it involves Emanuela Orlandi, the 15-year-old daughter of a Vatican employee that has been missing since 1983. Pietro Orlandi, who I have interviewed a few times in the past years, has become a good friend, and someone I admire and respect for his diligence in searching for the truth around the disappearance of his sister.

I hope with this breakthrough in the case of his sister,  Pietro will find the answers he has been searching for. The human remains of Emanuela have apparently been uncovered on Monday during renovation work being carried out in a building attached to the Apostolic Nunciature to Italy, basically the embassy of the Holy See in Rome.

“During some renovations to a room annexed to the Apostolic Nunciature in Italy, situated in Rome, Via Po n.27, some human bone fragments were found. The Corps of the Gendarmerie promptly intervened on the scene, informing the Superiors of the Holy See, who immediately informed the appropriate Italian authorities for the investigations and the necessary cooperation in the matter. At present, Rome’s Chief Prosecutor, Dr. Giuseppe Pignatone, has ordered the forensic division and mobile squad of Rome’s police headquarters to establish the age, sex and date of death.”

The spooky discovery that may unveil the shocking truth about Satanism in the Vatican is already making news worldwide and comes on the eve of Halloween night, 25 years after two teenage girls, Manuela Orlandi and Mirella Gregori (whose bones could also be involved in the discovery), mysteriously disappeared in Rome within the space of 40 days.  Investigators are now comparing the cranium and teeth with the DNA of both Orlandi and Gregori. A lawyer representing Orlandi’s family demanded more details from the Vatican after the discovery of the remains.

“We will ask the Rome prosecutors’ office and the Holy See how the bones were found and why the find has been related to the disappearance of Emanuela Orlandi and Mirella Gregori,” said the lawyer, Laura Sgrò, adding that “

The statement released yesterday by the Holy See does not provide much information.” The bones may well belong to two people, well-informed sources told me earlier today, but we now need the definitive confirmation of the DNA analysis.

This is a brief passage from my book Confessions of an Illuminati volume 3, that includes a whole chapter dedicated to my personal investigation in the matter:

“Emanuela Orlandi was linked to the disappearance of another teenager, named Mirella Gregori, who disappeared on May 7, 1983, never to be seen again. Emanuela attended a Roman school of music in Sant’Apollinare square, and on the day of her disappearance, on the street that connected the Vatican institute, she came upon a stranger, driving a green car. He attracted her with an offer of employment in the cosmetic marketing industry, to be carried out during a fashion parade, with an outrageous paycheck (375,000 liras, about the equivalent to a salary of the time). The 15 year old, before accepting, said she would have to get permission from her parents. Later, at 7 PM that evening, she exited the flute lesson she was taking, and phoned home to report the proposal to her dad. Her sister told her to be wary of an unprovoked and tempting project, and to return home as soon as possible to discuss it in detail with her mother. This was the last contact Emanuela had with her family. The late Father Gabriele Amorth, although having no direct knowledge of the facts, connected the disappearance of Emanuela to a Satanic cult operating in Vatican.”

A shocking truth I fully unveil in the book mentioned above still available at the Infowars store.

Interview from 2015 with Pietro Orlandi:

Interview from 2012 with Pietro Orlandi:

Leo Zagami talks about the case of Emanuela Orlandi with Sean Stone in 2014: