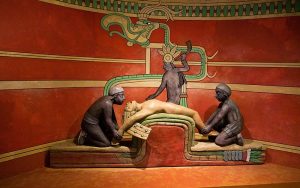 The custom of human sacrifice is evident in a multitude of cultures and regions around the world. Human sacrifice is the act of killing one or more humans, usually as an offering to a deity. Past physical evidence of such evil practice came prevalently from Mesopotamia, the Shang dynasty era China, and the Aztec world of Mesoamerica. Ancient Jews did not forbid human sacrifice, but they banned unnecessary blood effusions, such as inflicted by Mesopotamian worshippers of Baal (who, for example, sacrificed themselves to please their alien-like divinity). Patriarch Abraham was stopped from carrying out the sacrificial throat-cutting of his beloved young son, Isaac, by the “Word of God.” God solely intended to test Abraham’s obeisance and trust, and a surrogate sacrifice was made with an immaculate white raminstead, caught in nearby bushes.

The purpose and reasoning for human sacrificing remains a great mystery for the majority of researchers. It becomes difficult for scholars to pinpoint the origins and rationale for such rituals because they have not been initiated into the secret sects and mystery schools, controlling the established cults and religions that perpetrated them. Due to the emotional and moral dilemma of studying human sacrifice, much of the data and interpretations can be tainted by the personal feelings of the researcher. The majority of people often broadly label human sacrifice as evil and barbaric, having no interest in why such ceremonies occurred and  ignore the existence of such ceremonies in today’s society.

Aztec people of Mesoamerica constituted the most well-known civilization for the practice of human sacrifice. Although perhaps the most infamous method of human sacrifice in the Aztec civilization is the excision of the heart, many other methods existed like decapitation, cutting of the throat, being thrown into a fire, being shot with arrows, drowned, being buried alive, or hurled down from the top of a pole or pyramid. Human sacrifice is still practiced to this day around the world and not only by the dark side of the Illuminati.

On January 7, 2016 a teenage boy’s headless body was found near a cremation ground on the road to Bhagwanpur village in the Raigarh district of Chhattisgarh. Next to the headless corpse, earthen lamps, incense sticks, sindoor (vermillion), flowers and a bhoj-patra (plate) were strewn about. The father later admitted  beheading his own son after reading a black magic manual.

“After reading the book, I was convinced that this special puja was the only way to end my miseries. So I beheaded my son,” Bharti admitted to the startled police.

A few months later, in October 2016, again in India, an 18-month-old baby girl was allegedly sacrificed for a black magic ritual in the southern province of Karnataka. So why are such rituals still practiced in India? Black magic rituals are regularly practiced by the Hindu community in various parts of the country for personal gains, property dispute, treasure hunting, and male childbirth. Many Hindus believe in the use of black magic in curing diseases, taking revenge, acquiring wealth, or attracting an unwilling companion. This doesn’t happen only in India, as the practice of ritual killing and human sacrifice continues to take place in several African countries in contravention of the African Charter on Human and People’s Rights and other human rights instruments.

In the 21st-century human beings are still being hunted down, mutilated, murdered, or sacrificed for ritual purposes across the region to help the corrupt African elite maintain their positions. Several cases of kidnapping and disappearance of persons are traced to the vicious schemes and activities of ritualists often working with the dark side of the Illuminati. In most cases, those targeted for ritual sacrifice are vulnerable members of the population — the poor, women, children,the elderly, and people with disabilities.

Ritualists and magicians from certain secret societies hunt for and harvest human body parts to prepare charms and magical concoctions. In some cases, desperate ritualists invade cemeteries and exhume dead bodies to extract body parts. Ritual killing and related human rights abuse take place because many people still believe that the use of charms and the performance of ritual sacrifice can fortify them spiritually, enhance their fortune in business and during elections, or protect them from harm, disease, poverty, accident, death, and destruction. Africa and India have a truly dark side that is present in contemporary Western civilization even if mostly hidden.

The only Satanic sect that appears to condone human sacrifice and “human culling” out in the open these days is the Lilin Society, founded in 2013, in the United States. The Lilin Society presents itself as targeting the “serious practitioners” in search of “Luciferian Gnosis.” The society’s founder, Massachusetts native Asha’Shedim, describes the Church of Satan as “plastic” and says Lilins neither recognize them or the Temple of Set.

“Human sacrifice in the Lilin Society has many methods. There is the physical act through occult ritual, assassinations or staged accidents,”according to Asha’Shedim’s writings, “human sacrifice should only be practiced on those who are adversaries of Satan, and their death should be of benefit to Satan.”

According to Asha’Shedim’s blog, Lilins do not see Satan as the one  god, but one of many “dark gods”.  They do not worship Satan because “no Satanist shall bow to any god or man.” Instead, Lilins has “a profound appreciation of the acausal entities known as gods or demons. They are something we aspire to become one day.” Besides human sacrifice, Satan and his power can also be experienced through “sorcery” and “living sinister lives”, according to Asha’Shedim (aka Reverend Elijah Lawless, aka Aka Paimon, aka John Putignano) who seems to have well-established links with the dark side of the Illuminati dedicated to Voodoo, the Quimbanda, The Cult of Santa Muerte and to Qliphothic magic…