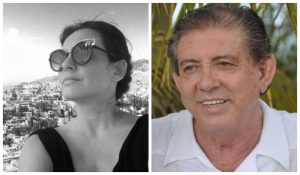 I have discussed in detail the incredible case of the Brazilian cult leader and black magician, Joao Teixeira de Faria – known as John of God –  with Owen Shroyer on the Alex Jones Show on the 19th of December 2018. But the dark saga of “John of God”  isn’t over yet, because he still has powerful people outside supporting him, and even killing for him, as he was the ring leader for a massive sex slave farm for the elite that sold babies to the highest bidder. The self-styled spiritual healer that claims the spirits of more than 30 doctors and other entities has some very powerful allies also in the demonic world.But “John of God” not only appeared on Oprah, he was rumored to have been visited also by ex president and notorious pervert Bill Clinton, by the singer Paul Simon, and even Naomi Campbell, and the famous spirit-cooker and Satanist Marina Abromovic, who shot a documenary film in Brazil featuring “John of God” in 2016 called “The Space In Between.”

Two months ago, however, the world of “John of God “ crumbled after police discovered evidence that he was a mass murderer, baby trafficker, and sex slave ringleader.  TheMirror.co.uk reported less than a week ago, on the 30th of January 2019, that Brazilian activist Sabrina Bittencourt, whose investigations led to Teixeira’s arrest in December, claimed the celebrity medium ran a baby trafficking operation where children were “farmed“ in Brazil before being sold to childless couples around the world.

However, Sabrina Bittencourt the woman who outed “Bill Clinton’s faith healer” as the leader of a child sex ring,  has now been found dead, amid a total media blackout from the main stream media.  According to local Brazilian reports, Sabrina Bittencourt, the activist who initially unmasked “John of God” turned up dead over the weekend. The story is nowhere to be found in the English-speaking press. Sex abuse support group Victimas Unidas, which worked with Sabrina Bittencourt, said she had left a note explaining why she killed herself. Eldest son Gabriel Baum confirmed her death, writing on Facebook: “She took the last step so that we could live. They killed my mother.”

Sabrina Bittencourt made one last phone call to Youtuber Felipe Neto before he says she took her life:

“Brazil’s biggest activist, Sabrina Bittencourt, called me crying yesterday because she could not stand the pain and pressure of the killers who persecuted her all over the world, condemning and bringing John of God to justice and  denouncing Sri Prem Baba. She has been working for 20 years to help young women and women who are victims of abuse around the world .Yesterday, after one of her sheltered witnesses in London sought refuge from hired killers, Sabrina called me to tears and did not know what else to do, she just wanted to help, but the evil, led by militiamen, the political rulers and powerful religious leaders, could win.”

From Cartacapital.com.br (translated from Spanish):

The death of Bittencourt, who was 38 years old, was confirmed in a note by Maria do Carmo Santos, president of the NGO Victims United.”The group Victims United reports with regret the death of Sabrina de Campos Bittencourt occurred around 9 pm this Saturday, February 2, in the city of Barcelona, Spain, where he lived. The activist committed suicide and left a farewell letter stating the reasons for taking her own life. We urge everyone not to try to get in touch with any family member, to keep them from asking questions that are painful at this difficult time. Two of Sabrina’s three children still do not know what happened, and her father, Rafael Velasco, is trying to protect them. Sabrina’s fight will never be forgotten and we will continue, with the same force, defending minorities, especially women who are daily victims of machismo.”

Before “committing suicide”, Bittencourt wrote a farewell post on Facebook: “Marielle I join you. I did what I could, as far as I could. My love will be eternal for all of you. Sorry to not bear it, my children.”

Born into a Mormon family, the activist has been abused since the age of four by members of the family’s church. At 16, she became pregnant with one of the rapists and aborted. Bittencourt dedicated his life to military by victims of abuse and to unmasking religious leaders, among them Prem Baba and “John of God.” Last December, the activist gave an interview to Fred Melo Paiva, editor of CartaCapital, in which she recounts her life story and her role in the denunciations of religious leaders who commit abuse. She promised to unmask 13 more leaders this year. We can agree that the circumstances of her death seem to indicate that she did not commite suicide but was rather killed to stop her from unmasking further more child sex ring leaders.

I want to let you know up front that many parts read like a conspiracy theory, just so you know what you are in for, however,already many of the events unveiled in this book have been proven accurate and Lyon Zagami is gaining notoriety as well as fame for predicting and revealing many truths that were previously thought of as myths.

We’re now given the means to lift that veil and decipher the masked reality that is transpiring right under our noses, without the majority knowing what is actually going on.