It is the first trip by a pontiff to the Arabian peninsula. Pope Francis’s historic visit to the United Arab Emirates (UAE) brings him this afternoon in an interfaith conference on human fraternity to begin infamous Chrislam, the Trojan horse of the future religion controlled by the Artificial Intelligence.

The Argentine pontiff is among 700 leaders from different religions taking part, including Ahmed el-Tayeb, the Grand Imam of al-Azhar, who is widely considered to be the highest authority on Sunni Islamic thought. Francis became the first pope to visit the Arabian peninsula when he landed in Abu Dhabi yesterday evening.

The Pope is accelerating the path towards a One World Religion and One World Government that will use Chrislam, but will eventually be controlled by Artificial Intelligence and implemented with the use of force by the future Robocops of the New World Order.

In the United Emirates a country that reportedly poured billions of dollars into AI investment , the country’s first operational Robocop, that will be used to chase down suspects and nab parking fee dodgers, joined Dubai Police in May 2018. “This is the official launch of our first Robocop,”said Brig Khalid Al Razooqi, Dubai Police director general of smart services. The robot’s built-in cameras will stream video to the police command center. “It has a smart intelligent system so it can protect people from crime, because it can broadcast what is happening right away to our command and control centre,” said Brig Al Razooqi. “We are also working on facial-recognition systems.”

“Languages such as Russian, Chinese, French and Spanish will be added to Robocop’s vocabulary. There are also more than 6,000 cameras installed across the emirates. We are watching all kinds of activity in the city,” Brig Al Razooqi said. “We protect the sensitive areas.”

In the meantime in the Vatican, the Pontifical Academy for Life is zeroing in on the world of robots and machines powered by Artificial Intelligence.

While the Academy’s focus is on the protection of human life and dignity, the rapidly shifting and radical capabilities of robotics are having an ever-increasing impact on human lives, people’s relationships, communities and creation, said Jesuit Father Carlo Casalone, an academy member and consultant on robotics and the A.I. 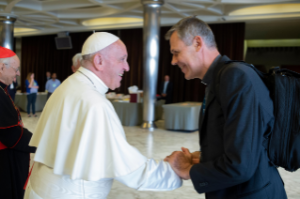 In May 2018, Sophia the Robot – the world’s most advanced Artificially Intelligent robot – officially visited Abu Dhabi. Sophia is the A.I.-powered robot famous for speaking at the United Nations and even interviewing a number of celebrities and world leaders working for the ultimate Psyop. She was recently named by the United Nations Development Program as first-ever Innovation Champion for Asia and the Pacific, and is also the first robot in the world to possess a nationality, after being granted citizenship by the UE neighbor, the Kingdom of Saudi Arabia.

“Robo Ethics. People, machines, and health” is the title for the Workshop that will take place at the Vatican during the next plenary assembly of the Pontifical Academy for Life to be held at the end of the month from 25 to 27 February 2019.

This is an article where I discuss this topic further:

Three and half years ago in New York, Pope Francis embraced Chrislam and laid the foundation for a One World Religion.

Now Bergoglio “the False Prophet” wants to go one step forward and merge this concept with robotics and the Artificial Intelligence.

I want to let you know up front that many parts read like a conspiracy theory, just so you know what you are in for, however,already many of the events unveiled in this book have been proven accurate and Lyon Zagami is gaining notoriety as well as fame for predicting and revealing many truths that were previously thought of as myths.

We’re now given the means to lift that veil and decipher the masked reality that is transpiring right under our noses, without the majority knowing what is actually going on.