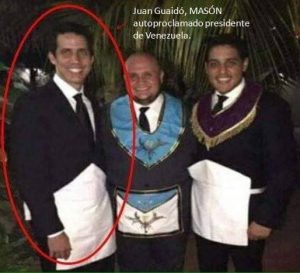 Juan Guaido after his initiation in Freemasonry

Since Wednesday, Venezuela has been in turmoil after President Trump announced he recognized opposition leader Freemason Juan Guaido as the Nation’s president, rather than the Socialist dictator, Nicolas Maduro, a Satanist immerged in Communism. Piñango, a Sociologist from the Venezuelan University of IESA said that“Maduro has a very strong ideological orientation, close to the Communist ideology.”

That’s probably why Maduro is being defended by the Communists of the ex-Soviet Union, who should mind their own business in South America. However, on Wednesday, President Nicolás Maduro faced the gravest challenge of his authority since assuming power in 2013, as Juan Guaido, the leader of the masonically backed opposition, rightly claimed the legitimate mantle of leadership. President Trump and other world leaders promptly recognized him as Venezuela’s interim and rightful Head of State after receiving an emergency request from the various Grand Lodges of Venezuela united in this appeal to the Masonic Obediences around the world  who don’t follow the orders of progressive Liberal Freemasonry in the hands of the mondialists.

Ten years ago, Francisco Pereiro Liz, the Grand Master of the regular Masons of Venezuela was shot and killed on March 6, 2008, during an apparent kidnapping attempt secretly orchestrated by the Socialist forces of the late president, Hugo Chávez. This time, the Freemasons from Venezuela have launched a dramatic appeal that may end up in a blood bath if not answered. As you can see from the photo, Juan Guaido is a young apprentice that needs our help.  Remember, Socialism and Communism are enemies of true Freemasonry and Christianity, but Pope Francis and the Jesuits still support dictator Nicolas Maduro, who must be stopped and destroyed at all costs to facilitate the reconstruction of Venezuela and escape from evil Communism. As the people of Venezuela, together with its Legislative Branch suffer under the tyrannical oppression of president Nicolas Maduro, Communist Pope Francis received him at the Vatican on October 24, 2016, and was allowed to be photographed giving his blessing to the dictator. The False Prophet and his  minions are the enemies of mankind! By the way,  the present day Secretary of State of the Vatican, Cardinal Pietro Parolin, was Papal Nuncio in Caracas, Venezuela, just before being chosen by Francis for this new important function, and Venezuelan Arturo Marcelino Sosa Abascal SJ (born 12 November 1948) is the thirty-first and present Superior General of the Society of Jesus and the infamous Black Pope. This time Freemasons really need to decide whose side they are on!

Hopefully this new confrontation will break the powerful alliance between Freemasons and Jesuits in South America.

In the meantime, as Grand Master of the Strict Templar Observance we pray for our Brothers in Venezuela.

26 thoughts to “Freemasons VS Jesuits in Venezuela”