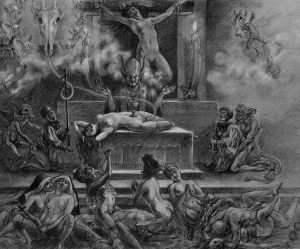 On the return flight home from Panama, Pope Francis basically destroyed any hope that the upcoming Synod could finally make important decisions concerning the current sex abuse crisis that is afflicting the Church worldwide. New anti-pedophilia norms have been asked both by authorities and the clergy worldwide, but Pope Francis blames everybody else instead, saying that the problem is everywhere, not only in the Church, deflecting the attention away from the growing drama of clergy being exposed. The question was the following:

“During lunch with a group of young pilgrims, a young American girl told us that she had asked you about the pain and indignation of many Catholics, especially those in the United States, over the abuse crisis. Many American Catholics pray for the Church, but many feel betrayed and torn down after recent reports of abuse and cover-ups by some bishops and have lost faith in them. What are your expectations and hopes for the meeting in February so that the Church can begin to rebuild the trust between the faithful and their bishops again”

And this is the unsatisfying answer given by Bergoglio, joking in the process:

“This one is clever (he jokes, ed), he started from WYD to get there. Congratulations. Thank you for your question. The idea was born in C9 because there we saw that some bishops did not understand well or did not know what to do or did one good thing and another one wrong, and we felt the responsibility to give a “catechesis” on this problem to the episcopal conferences. That is why the presidents are called. A catechesis that, first: we should become aware of the drama, what is an abused child. I regularly receive abused people. I remember a 40-year-old who couldn’t pray. This is terrible, the suffering is terrible. First, let them become aware of this. Second: that they know what to do, the procedure, because so many times the bishop doesn’t know what to do. General programs must be made, but that they reach all the episcopal conferences. What the bishop must do, what the archbishop who is the metropolitan must do, what the president of the episcopal conference must do. But let it be clear, they should be, let’s say in somewhat legal terms, clear protocols. That is the main element. But first we have to do what I said before, to become aware. Then there will be prayer, there will be some testimony to help one become aware and then some penitential liturgy to ask for forgiveness for the whole Church. They are working well in the preparation of this. I would like to say that I felt a little bit of an inflated expectation. You have to deflate the expectations. Because the problem of abuse will continue, it is a human problem, and is everywhere. I read a statistic the other day, 50% is reported, 20% is listened to and it ended with 5% is condemned, That’s terrible. It is a human drama and we must become aware of it. We too, by resolving the problem in the Church, but becoming aware of it, will help to resolve it in society, in families where shame covers everything. But first we must become aware, have the protocols and move forward”.

In the meantime, Satanists from around the world claim that Catholic priests  are giving them the host to celebrate their Black Masses, and the Contributing Editor of the Weekly Press – Philadelphia Free Press, Thom Nickels, published a shocking article today about the infamous Black Mass that allegedly took place inside Vatican walls in the early 60s during the Second Vatican Council. The Black Mass took place in the Pauline Chapel on the night of June 29th, 1963, during the anti-Christian Second Vatican Council: In a ritual enthronement of Satan, according to  witnesses, a not yet 40 year-old  Prussian Delegate  who many believe was Joseph Ratzinger, (Benedict XVI) handed the Tiara over to Satan, and those present swore to be faithful to Satan and build a Universal Church. Since then, no Pope has worn the tiara. The Pauline Chapel, from where Satan was to rule a Universal Church, was out of use for many years, and the crucifix and the Madonna were missing, but they are now back so they can continue to fool the world.

Finally, people are waking up to the truth, and the article by Thom Nickels, who is a known conservative commentator and Philadelphia-based author of nine literary works, and who has also been the recipient of the 2005 Philadelphia AIA Lewis Mumford Architecture Journalism Award, confirms this trend. Thom Nickels writes:

“While the Catholic Church claims it needs more exorcists, according to Papal insider (and now deceased) Jesuit theologian, Malachi Martin, the Catholic Church may need an exorcist. Martin, who died in 1996, says that at the height of the Second Vatican Council in Rome, there was a ceremony to enthrone Lucifer in the Vatican (and the Chair of Peter). The church in question, Saint Paul’s chapel within the Vatican walls, hosted a very different rite of Mass on January 29, 1963, just one week after the election of Pope Paul VI. (Years later, according to Fr. Martin, Pope Paul VI would write a note to his successor, John Paul II, and tell him of this ceremony.) Paul VI is also famous for his statement, The smoke of Satan has entered the sanctuary. For decades, this statement has been the source of much confusion and controversy, but when paired with Fr. Martin’s testimony, it fits like the lost part of a puzzle.”

Thom Nickels adds that “Martin (who stated that only a future pope could exorcize the Church) is not the only authority to confirm that there’s a secret cabal of Satanists and Freemasons high up in the Catholic Church.”

Well, when I began talking about the infamous Black Masses in the Vatican over ten years ago, I was attacked ferociously by my journalist collegues, so what Thom Nickels published today is a refreshing change. Have they finally realized the truth?

4 thoughts to “Pope Francis and the Vatican Black Mass”