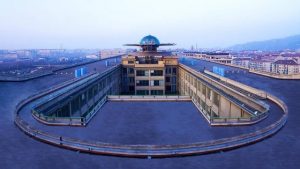 The new role of Italy in the populism uprise in Europe is obviously becoming a serious threat for the mondialist establishment, and for this reason the annual Bilderberg meeting from the 7thto the 10thof June 2018, will take place right at the heart of the problem, in Turin, Italy. Turin is a city ruled by the Five Star Movement, one of the two political forces that form the new Italian populist government, together with the Northern League.

Among the many powerful guests arriving for this yearly event, will be none other than the Second-in-Command of the Holy See, the powerful Vatican Secretary of State, Cardinal Pietro Parolin.

This is the official list of the participants: http://www.bilderbergmeetings.org/participants.html

The main subject for discussion this year, will be, in fact, the populist rise in Europe.

The Bilderberg meeting was founded in1954 by the now deceased David Rockefeller. This eliterian institution unites ministers, industrialists, CEOs of multinationals and the heads of numerous banks. Prominent figures in the political, economic, academic and media world will be present to promote their mondialist-leftist ideas, but this year they will also have the support of the Vatican Secretary of State,  who some say will deliver a secret message written by Pope Francis to his minions. 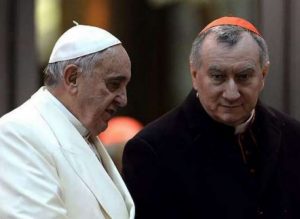 The conference takes place behind closed doors under the infamous Chatham House rule, built for holding debates and discussion panels on controversial issues, named after the headquarters of the UK Royal Institute of International Affairs. At a meeting held under the Chatham House Rule, anyone who comes to the meeting is free to use information from the discussion, but is not allowed to reveal who made any of the comments. Officially, it is designed to increase openness of discussion, but in reality, it is the ideal place for the mondialists to secretly enforce their evil plot to ultimately establish a Vatican-lead New World Order.

The Bilderberg Group communicated to the Italian press agencies that, “The participants, thanks to the private nature of the conference, are not bound by the conventions of their offices or by their already agreed positions. They can therefore take the time to listen, reflect and gather ideas. There is no desired result, no reports are taken and no report are written. Moreover -resolutions are not proposed, no voting is carried out and no programmatic declarations are issued. “

This year there are a total of twelve key topics for discussion during the infamous Bilderberg meeting in Turin. As I wrote above, populism in Europe will have a central role in their discussions, especially after the formation of the new Italian Government, followed by another topic of great interest for the elite, and that is the latest developments in artificial intelligence and quantum computers. New machines that are 100 million times faster than your average PC,  and – in theory – could defeat all modern encryption, and soon become a worldwide threat to established technology for countries like the US, if China is left to lead this new technological revolution. From secure banking transactions, and confidential correspondence, to Blockchain andDigital assets, like Bitcoin – quantum computing can crack all this quickly and simply, creating the future conditions for either chaos, or for a full artificial intelligence take-over of the New World Order. Something the Bilderberg Club seems eager to discuss at this meeting.

Other topics of interest will include the US mid-term elections, and how they can defeat Donald J. Trump’s economy and protectionism with free trade, the present US world leadership and Russia, and the confrontation between Saudi Arabia and Iran.

The Bilderbergers will also discuss “Post-truth politics” and the use of fake news, that in their eyes, is the winning factor in Trump winning the presidential election and also for Brexit.

We need to wake up to the manipulation games played behind closed doors by the infamous Bilderberg Club and the Vatican, who are finally out in the open with their presence at the event.