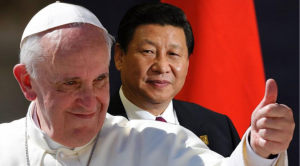 Chinese propaganda and alleged “experts” continue to say daily that there’s no evidence that COVID-19  is a man-made virus, stating it’s “highly unlikely” that it is the result of an accident at a lab, but in this article, I will prove they are lying. Forget the conspiracy theories when the reality is even stranger than anything you could ever imagine. An anomalous episode found in the Chinese chronicles of the last few months confirms our worst fears regarding the possibility of COVID-19 being a man-made bacteriological weapon.

According to my Italian colleagues of the highly respected news outlet Tgcom24 owned by Berlusconi, well before the international epidemic linked to the Coronavirus, later called COVID-19 ever started, there was a specific military exercise in Wuhan to prepare the armed forces in dealing with such an event. The Chinese authorities asked the army in September 2019 to organize rescue operations simulating a bacteriological hazard from a harmful virus. The simulation exercise in question was scheduled only a month before the 2019 Military World Games, officially known as the 7th CISM Military World Games,  held from October 18–27, 2019.

Coincidentally, the enemy to be beaten in the  simulation was called “coronavirus”, a definition that concerns a large number of viruses known to cause various diseases. Two months later in Wuhan “patient zero” of the mysterious “coronavirus”who may have been a worker from a high-security pathogen laboratory working with coronavirus infected bats was registered at the Union hospital where a group of doctors were among the first to become infected. A research paper released by biologists Botao Xiao and Lei Xiao points to a bloody incident in late November or early December 2019 at the Wuhan Center for Disease control laboratory, WCDC, less than one mile from the infamous disease epicenter at Wuhan fish market pointed out by most mainstream media.

In the document entitled “The possible origins of 2019-nCoV coronavirus” the biologist said: “A researcher described that he was once attacked by bats and the blood of a bat shot on his skin. He knew the extreme danger of the infection so he quarantined himself for 14 days.In another accident, he quarantined himself again because bats urinated on him.”

Final evidence of COVID-19  being a man-made killer disease made in China is also in an email sent by the Wuhan Institute of Virology to their staff on January 2, 2020, following the orders of  China’s Communist Party: “The national health committee explicitly requests that all experimental test data, results and conclusions relating to this virus are not published in independent media.” Reads the letter, which continues specifying that the content: “must not be disclosed to the media, including the official ones and the organizations they work with. We ask you to strictly respect what is requested. ”

This confirms that COVID-19 is a dangerous man-made virus as I wrote in earlier articles in leozagami.com that was also the first site to break the news worldwide on the 10th of February 2020 on the predictive programming found in Dean Koontz’s original novel from 1981 entitled, The Eyes of Darkness,that features the infamous virus “Gorki-400” updated in the 90’s post-Soviet edition to “Wuhan-400”, described by the author as a human-made weapon.

After all, a similar accident involving a bioweapon that might have initially inspired Dean Koontz happened in the U.SS.R. in January 1980, when reports surfaced of an “outbreak of disease” in the city of Sverdlovsk, today’s Yekaterinburg, in Russia’s Ural Mountains.U.S. intelligence reports at the time suggested that an anthrax outbreak that originated at a biological weapons facility located nearby, and American assessments placed the casualty count above 1,000. Satellite imagery later showed that a building in the suspect military complex was abandoned after the incident.

Of course, the fact-checking libtard website snopes.com serving CNN wrote in an article by Dan Evon dedicated to the subject: In Koontz’s novel, “Wuhan-400” is a human-made weapon. The coronavirus, on the other hand, was not.

In the meantime,  Vatican and Chinese foreign ministers meet for the first time in over 50 years sparking rumors even in the Italian mainstream press that the meeting was connected to the coronavirus outbreak.The Vatican announced this major and unexpected development between the two sides late in the evening on Feb. 14. It appears to be the highest-level meeting between the two sides since the Communists came to power in China in October 1949.

The meeting reflects significant warming of relations between the two sides that as I pointed out in my latest book Confessions of an Illuminati Volume IV are working together to depopulate the Earth and destroy our Western Civilization, in favor of a Communist/Jesuit led New World Order. The World population is completely out of control for the elite ready for the robot A.I revolution and a cashless society. That’s why plans are underway now, by Beijing’s central bank to destroy cash from areas completely overrun by the coronavirus and at the same time help depopulate the planet’s 6-7 billion people to reach a more manageable level of between 500 million and 2 billion. Remember at the beginning of December 2019 a top Vatican bishop and China’s state-run Global Times confirmed Pope Francis’ wish to visit Beijing and establish formal diplomatic ties with the country, soon after the coronavirus outbreak started in Wuhan City.