On the 29thof September 2019 in the Colosseum, a place of Christian martyrdom, a satanic statue of the infamous god Moloch associated with child sacrifice appeared for an exhibition that started at the end of September dedicated to the Carthaginian myths which is creating controversy especially amongst traditional Italian Catholics.

For this unusual initiative, a reconstruction of the god Moloch in hollow bronze taken from the film Cabiria, an old 1914 Italian epic silent film directed by pioneer film director Giovanni Pastrone and shot in Turin, has been placed at the entrance of the world-famous Colosseum.

Italian author and Illuminati member Gabriele d’Annunzio, a 33rd degree Freemason deeply involved with sexual magick practices contributed to the screenplay, writing all of the intertitles, naming the characters and even the movie itself. D’Annunzio, Prince of Montenevoso, Duke of Gallese, who occupied a prominent place in Italian literature from 1889 to 1910 and later in politics from 1914 to 1924, is considered by some historians the poet who invented Fascism and inspired Mussolini. On September 12, 1919, five years after the release of Cabiria, supported by a few former black-clad army buddies known as “arditi,” d’Annunzio marched into the Hapsburg city of Fiume (now Rijeka in Croatia) and declared himself its leader. During his strange, chaotic, 15-month rule over the city, it became a haven for all kinds of Illuminati misfits like occultists, futurists, practitioners of free love and, of course, Satanists.

According to Martin Scorsese, in the film Cabiria the director Pastrone invented the first epic movie and deserves credit for many of the innovations often attributed to D.W. Griffith and Cecil B. DeMille.

One of the most shocking scenes of this film is represented with a huge temple of Moloch, a gigantic three-eyed head, with the mouth as a doorway to the infamous temple. The images show one hundred young children ready to perish as offerings to the evil god Moloch, and it is inside this temple full of devotees of the dark side involved in the ritual that we find the colossal seated statue of the winged god Moloch now exhibited at the entrance of the Colosseum. 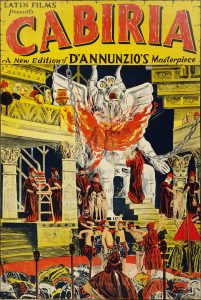 “We Christians are called to repair with supplications and prayers because this pagan god is forbidden by God in the Old Testament!  Please organize reparation prayers, go to these posts with exorcised water and salt and pray with the cursing psalms, exorcism prayers, litanies to the most precious blood of Jesus Christ!”

So what is the real reason for placing Moloch inside the Colosseum in Rome in this particular time of the year just before the Christian holy days of All Hallows’ Day? The statue will be there until the 29th of March 2020 and will be removed before Pope Francis leads the yearly Via Crucis at Rome’s Colosseum. Are the Vatican Illuminati preparing for the ultimate child sacrifice?  The situation is pretty incredible and even if I am an old researcher on these topics I am left in shock and with no words this time.

Is Rome about to feel the wrath of God? Or are they trying to avoid that by sacrificing a few children to Moloch?

Let us pray, this is another sign of the End Times.