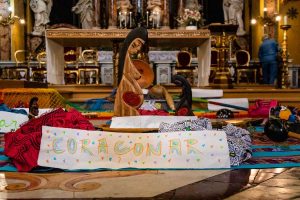 During the feast of the Patroness of the Order of the Holy Sepulchre celebrated throughout the Order’s lieutenancies on October 25th, a General of the Italian Carabinieri involved with the prestigious Vatican Order communicated to the Pope that the controversial Pachamama statues were recovered from the Tiber river. The news was received by the Pope, weary of the criticism that surrounds the idolatrous statues.

The following is a transcript of an official statement made by Pope Francis on Friday, immediately after the recovery during the 15th General Congregation at the end of the prayer :
“Good afternoon, I would like to say a word about the Pachamama statues that were removed from the Church at Traspontina, which were there without idolatrous intentions and were thrown into the Tiber.

“First of all, this happened in Rome and, as bishop of the diocese, I ask pardon of the people who were offended by this act.

“Then, I can inform you that the statues which created so much media clamor were found in the Tiber. The statues are not damaged.

“The leadership of the Carabinieri will be very happy to follow any indication given on the method of making the news public, and regarding the other initiatives desired in its regard — for example, the commander said, ‘the display of the statues at the closing Mass of the Synod.’ We’ll see.

“I delegate the Secretary of State to respond to this.

“This is good news, thank you.”

Pope Francis might even display the pagan statues today during the closing Mass of the Synod, however, the controversy surrounding the objects has not ended and after Bishop José Luis Azcona, Emeritus Bishop of Marajó in the Amazon region openly condemned the pagan rites surrounding the idol describing them as “demonic sacrileges that produce scandal” another Bishop intervened on the matter with an new open letter published yesterday.

The Bishop in question, Athanasius Schneider of Astana, Kazakhstan, invoked even his “ordination as a Catholic bishop and successor to the Apostles”condemning the use of the pagan Pachamama idols in the churches in Rome, and praising the “courageous and praiseworthy act”of the“brave Christian gentlemen” who “expelled the wooden idolatrous statues from the Church of Santa Maria in Traspontina in Rome, and threw them into the Tiber.”

“Like a new ‘Maccabees’,”Bishop Schneider writes, “they acted in the spirit of the holy wrath of Our Lord, who expelled the merchants from the temple of Jerusalem with a whip. The gestures of these Christian men will be recorded in the annals of Church history as a heroic act which brought glory to the Christian name, while the acts of high-ranking churchmen, on the contrary, who defiled the Christian name in Rome, will go down in history as cowardly and treacherous acts of ambiguity and syncretism.”

Last week, the Vatican Media, who has condemned the heroes who tried to get rid of these pagan monstrosities, interviewed Father Paulo Suess, a German priest in Rome for the Synod who is regarded as an expert on the Amazon region. Father Suess was asked about what many traditionalists perceived as an heretic ceremony that was held with Pachamana in St. Peter’s Basilica on October 7th.

Fr. Suess said “It is definitely the case that there is a noticeable sentiment against the synod on the part of certain media here….Someone wrote that it was a pagan rite. So what?” Addingshamelessly: “Even if that had been a pagan rite, what took place was still a worship service. A rite always has something to do with worship. Paganism cannot be dismissed as nothing. What is pagan? In our big cities we are no less pagan than in the jungle. That’s something to think about.”

Vatican Media eventually removed the comments from its interview with the priest, with no note or indication of the redaction, but his words described the Satanic spirit of the Synod ending today.

As the Catholic News Agency reported yesterday: “Anyone who wants to understand how the Vatican’s synod of bishops on the Amazon has become such a flashpoint for controversy, or why five carved statues were removed from a Roman church and tossed into the Tiber River, should think carefully about Fr. Suess’ comments, and their publication by the official media organ of the Holy See.”

Pachamama is back in the Vatican and the heresy continues.