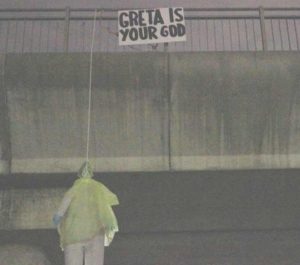 The Globalists and their Jesuit friends are in shock after an effigy of teenage climate activist Greta Thunberg hanging by a noosefrom a bridge was discovered yesterday on Via Isacco Newton near the Italian capital’s Fiumicino airport.This was a clear sign of intolerance towards what many perceive, even in Italy, as a brainwashed child in the hands of George Soros and Jesuit propaganda.

It was found on a day when thousands of activists protested once again in cities around the world seeking further action on what they perceive as a climate change issue.The International Atomic Energy Agency (IAEA) began it’s 2019 International Conference on Climate Change and the Role of Nuclear Power in Vienna yesterday and it will last until the 11th of October, 2019. The conference, that is said to provide a platform to discuss scientific and technical aspects of the role of nuclear power in combating climate change, does not mention, of course, the Fukushima Daiichi nuclear disaster, that as we all know caused the biggest  environmental disaster in the history of mankind.

The left-wing mayor of Rome, Virginia Raggi, whose party is now allied with the Italian Democrats, have decried the act as “shameful.” The puppet features long braided hair and a sign written in English reading “Greta is your God.” It seems like somebody with a rather extreme sense of humor wanted to send a powerful message to the Vatican elite who are busy until the 27th with the Synod of Bishops for the Pan-Amazon region that is also discussing climate change.

Ms Raggi,  whose city is looking more and more like a war zone full of trash and refugees, offered her solidarity, “and that of the whole of Rome” to Greta and her family. “Our climate commitment does not stop,” she tweeted. In the meantime, the Agence France-Presse news agency reported Italian authorities have opened an investigation for “aggravated threats.”

Let’s remember this event took place right in the belly of the Beast, in Rome, near the Vatican, where police forces are simply an extended arm of an increasingly Orwellian State in the hands of the Jesuits and EU technocrats who are oppressing their citizens more and more.