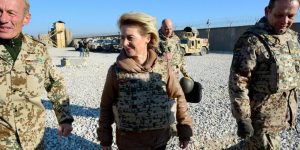 Yesterday, Ursula von der Leyen another member of the European Nazi elite became the European Commission’s next president, narrowly winning election in the European Parliament while supported by the usual elitist.

The Albrecht family involved in the German Illuminati were among the patrician (hübsche) families of the Electorate of Hanover as doctors, jurists and civil servants since the 17th century, but his immediate ancestors were wealthy cotton merchants in Bremen and members of the city-state’s Hanseatic elite in the 19th and 20th centuries.

Ursula is the daughter of the late Ernst Carl Julius Albrecht, who was a German politician of the Christian Democratic Union and a former high-ranking European civil servant who during his career was involved in an unusually large number of political scandals; most famously, the Celle Hole.

Her greatgrandmother Mary Ladson Robertson was an American from the planter class Southern aristocracy, that dominated seventeenth- and eighteenth-century agricultural markets through the forced labor of slaves of African origin.

Unfortunately, the new role of this  Trump-Hating Nazi Ursula von der Leyen, who headed Germany’s defense ministry for six years before she resigned to take on this new job, will put her at the forefront of negotiations with the U.S. creating new tension.

Ursula von der Leyen has called Donald Trump’s discussions of NATO “immature” and while Reuters reports that the U.S. House of Representatives voted on Tuesday to unjustly condemn Donald Trump for “racist comments” allegedly made against four clearly anti-American Democratic congresswomen on Sunday, the left-wing mondalist scumbags are rejoicing over their decision to place Ursula von der Leyen as president of the EU commision once held by Philip Juncker.