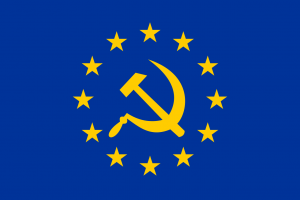 Yesterday, the European Parliament voted to approve a directive setting new copyright rules for the Internet. The directive will affect freedom of expression and start a new censorship era. But European Parliament President and mondialist Antonio Tajani, also a member of the evil Vatican Illuminati, said it was a “balanced reform”that ends the “current digital wild west,”but this is not true.

The reality is, the European Parliament voted to pass a new copyright directive on behalf of the New World Order that includes problematic rules that will harm free knowledge and free speech. They did so after years of discussions, revisions, and more recently street protests that unfortunately went unheard. It is a disappointing outcome for all European Infowarriors, the impacts of which will certainly be felt for years to come in a style reminiscent of the Soviet Union. In the Russian Federation at the moment they are actually setting up up a mass censorship system akin to what is seen in China, that scrubs out prohibited traffic and silences dissent. It seems the future of  freedom of expression on the internet is increasingly uncertain.

So while entire undemocratic countries are “unplugging” themselves from the internet, the EU is trying to do the same with a “softer” approach. As Articles 15 and 17 (formerly 11 and 13) of the directive will take effect across the European Union (EU) in the next two years, we expect to see direct repercussions on all online activities including my own leozagami.com if we continue to operate from Europe. Article 15 will require certain news websites or blogs to purchase licenses for the content they display. As a result, many websites that helped people find and make sense of current events with their limited resources will be forced out of the game. Article 17 will introduce a new liability regime across the EU, under which websites can be sued for copyright violations by their users. In the last year a growing number of websites from the U.S. are not accessible from Europe.

This whole mess will incentivize websites and even social networks to filter all uploads and keep only “safe” copyrighted content on their sites. Can you imagine the chaos on platforms such as Facebook that operate worldwide with such regulations? With these limitations to copyright they are making platforms the judges of what is and isn’t infringement, opening the possibility for ulterior censorship.