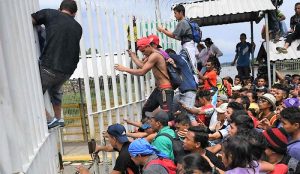 Pope Francis is preparing his next move in defense of the Central American migrant caravans of loyal Catholics ready to serve him. The Jesuits have been supporting and secretly directing the work of Pueblo Sin Fronteras (“People Without Borders”) during its entire operation, and contrary to what recent headlines suggest, the caravan of migrants from Latin America traveling north is not a brand new event, although the latest group is definitely the largest yet.

The New World Order organization, Pueblo Sin Fronteras states that its goal is to advocate for international solidarity and more open and sympathetic borders, when in reality they are favoring a world of crime and chaos. Unlike the past caravans, the October 2018 caravan, that is gaining a lot more attention from the media, is not directly organized by Pueblo Sin Fronteras, but the group still offers logistical support for the project built by Soros and inspired by Pope Francis to destabilize the US and President Trump.

Officially Pueblo Sin Fronteras is a project of La Familia Latina Unida, a Chicago-based 501(c)(4) illegal immigration advocacy organization formed in 2001 by Elvira Arellano, an activist for immigrants and Jesuit agents living illegally in the United States. The organization is affiliated with the Chicago-based 501(c)(3) pro-illegal immigration groups Centro Sin Frontera sand Pueblo Sin Fronteras. Together, these two organizations have been involved in organizing thousands of illegal migrants from Central America to attempt to cross the U.S. and Mexican borders illegally since 2010.

The Catholic Legal Immigration Network, Inc. (commonly referred to as CLINIC) is a Jesuit stronghold and the United States’ largest network of non-profit immigration programs.

In its 1986 pastoral statement “Together a New People,”the United States Conference of Catholic Bishops (USCCB) observed that the church’s ministry to immigrants reflects  “the biblical understanding of the justice of God reaching out to all peoples and rectifying the situation of the poor, the orphans, the widows, the disadvantaged, and especially in the Old Testament, the alien and the stranger.”

With the situation escalating in Tijuana the Pope is now expected to become increasingly more involved in an open confrontation with Donald J. Trump on the future of these migrants. Back in February, Nancy Pelosi took to the floor of Congress asking Catholics to pray for legislation supporting “Dreamers”: children of illegal immigrants who came to  America as minors. Her piety was, in a word, ostentatious. “Maybe I should bring my rosary blessed by the Pope… His Holiness, Pope Francis, or the one before that, Benedict,” she mused.  “I have the honor and privilege of receiving rosaries blessed by several popes in my lifetime.”

Remember, the Catholic Church is the leading institution backing Soros’ open borders policy in favor of uncontrolled immigration. According to Vatican documents, Pope Francis expressed his support for the caravan early this month while addressing the participants of the XV General Chapter of the Congregation of the Missionaries of San Carlo.

Much of the Holy Father’s speech focused on the virtue of welcoming the stranger and how nations need to foster this virtue or risk their own demise. The Catholic Church once recognized the right of a sovereign nation to enforce its borders, but that’s no longer the case with Pope Francis.

Cardinal Pietro Parolin, Vatican Secretary of State, wrote in the introduction of his new book  “Immigration, understanding and proposals”, that “Migrations have always existed in human history and have contributed substantially to the birth of great civilizations in the past and present.”  Words repeated at the Pontifical Gregorian University, run by the Jesuits on Monday evening during the presentation of the book.

The only Catholic priest that seems to be making any sense lately is Alejandro Solalinde Guerra, who recently accused Pueblos Sin Fronteras of bringing the Central American migrant caravan to Tijuana to provoke the anti-immigrant policies of US President Donald Trump.