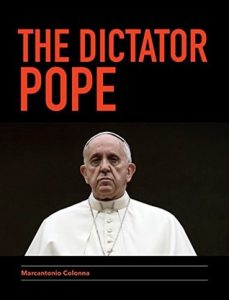 Henry Sire, who was a member of the Sovereign Order of Malta when hepublishedunder the pseudonym Marcantonio Colonna, the controversial book entitled The Dictator Pope,  said the Vatican was desperately trying to discover its real identity.

The book was published as a Kindle edition and immediately caused consternation with its claims about Pope Francis’ reign, just like my own book “Pope Francis: The last Pope?” a few years earlier. When asked by The Catholic Herald whether or not he thought his anonymity would last, Sire replied:

“Under the present Pope, the Vatican machine has taken espionage to a new level, and I have little doubt that they will unmask me eventually, perhaps after a few more false casts. But they will need to ask themselves whether it is at the cost of giving me more publicity.”

A “new level”was to be expected with a Jesuit Pope in control of the Vatican, however, some critics suggested that Henry Sire’s book was mere gossip, as they initially did with my books. The book reveals a secret report by the ex-Jesuit superior general Fr Peter-Hans Kolvenbach, commissioned when Fr Jorge Bergoglio was proposed as a bishop in Argentina. Fr Kolvenbach’s report allegedly stated that Fr Bergoglio was “unsuitable for such an appointment”because of character defects, which he went on to describe in great detail. The report has since disappeared.

Asked why the readers should believe this, Sire replied: “The account I give of the report in my book is not based on rumor. It’s based on first-hand information I received from a priest who read the report when it was first issued, and who was fully in the know of the ecclesiastical process involved.”

Sire stated that his main concern in writing the book was not primarily to cover the recent doctrinal controversies in the Church, but rather to expose the real Pope Francis.

“My purpose was simply to show the gulf that exists between the image of the liberal, democratic Pope Francis and the true character of this pontificate,” he said. “That is something that ought to give all Catholics cause for concern.”

No wonder the historian Henry Sire has now been expelled from the Sovereign Order of Malta for his strong criticisms of Pope Francis, even if Sire still plans to appeal in the coming months.  Sire was suspended back in March as a cautionary measure when the not so Sovereign Order set up a disciplinary commission to investigate the matter further. Something like this could have happened to me, and that’s one of the main reasons why I joined an Orthodox Church faction of the Knights of Malta years ago,  as to avoid such problems with the Catholic Church.

The Dictator Pope criticized Francis’s interventions in religious orders and said the Pope had introduced doctrinal ambiguity, following the program of the “St Gallen Mafia” who brought about his election. Sire also claimed the Vatican was increasingly dominated by corrupt churchmen, while officials with integrity lived in fear of being sacked. The book has received a divided opinion by Catholic readers as some praised the book as an accurate portrayal, while others thought it was inadequately sourced and guilty of irreverence towards Pope Francis.

Now, the Grand Master of the Order of Malta, Fra’ Giacomo Dalla Torre, has decreed that Sire be expelled from the Order, as his book is considered “gravely offensive and disrespectful to the person of the Holy Father”and his conduct “gravely incompatible with his membership of the Order”.

Sire defends his book saying it is a necessary warning to the Catholic Church, saying that he hopes it will help the Cardinals at the next conclave “avoid making the same mistake.” In a statement following his expulsion, Sire stated that he wrote his book “for the good of the Church, in defense of the Faith and in obedience to the duty of a Christian to witness the truth”. But the decree of expulsion says that while Canon Law recognizes a right to public commentary on the Church, it also says that such commentary must show ”reverence to pastors”,and be “attentive to common advantage and the dignity of persons”.

The decree basically states that Sire went too far in his book. However, the expulsion was immediately followed by disagreement about whether due process had been followed by what we can consider an ex-Sovereign Order, that is now fully controlled by the Jesuits and Pope Francis. In a statement, Sire rightly said the expulsion was “illegal because it side-steps the procedures and principles laid down in the Order’s own legal Code.” He claims that while he exchanged letters with the commission he was never summoned to a hearing, and no witnesses were named. A typical modality in these cases of expulsion.  A spokesman for the Order told the Catholic Herald that “The Disciplinary commission invited Henry Sire to come to Rome to defend himself, something he never did.”

Sire rejected this claim, saying, “At no time was any mention made of a hearing before a tribunal of the Order at which I was expected to be present. My lawyer and I answered in full all the requests for a defense made by the disciplinary commission, and did so within the deadlines stipulated. It is a complete falsehood to imply that I have failed to satisfy my obligations in the procedure initiated against me.”

Sire and his lawyers intend, nevertheless, to appeal against such judgment,“through the courts of the Order and if necessary to the Holy See,” according to a statement made to the press.

Maybe Sire should forget about it and remember the title of his book in this situation.