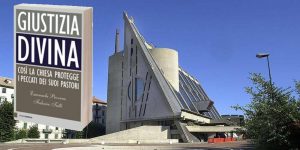 A growing number of safe houses are being established around the world by the Vatican to hide pedophile priests who are exposed every day. A safe house is, in a generic sense, a secret place for sanctuary or suitable to hide persons from the law, hostile actors or actions, or from retribution, threats or perceived danger.

In such places, old priests are usually taken care of by a nun for many years.  The nun seems to be there just to cook and clean, but actually, she is checking on the priests, and they live in these houses upon the decision of the Roman Catholic Church. They must acknowledge and atone for their “sins”.

Vatican Law establishes that such “houses for atonement and reformation for priests from every diocese” should exist, becoming de facto a sort of safe house, like the ones used by the intelligence services for various purposes. Places where in the past Russian spies came in from the cold after defecting or Bobby Kennedy partied away. Such Catholic safe houses that are present worldwide have been investigated in depth by two Italians. Former numerary member of Opus Dei Emanuela Provera and journalist Federico Tulli, who traveled through Italy visiting and later reported their findings about the so-called “treatment centers” for priests and nuns “with problems” in their book Giustizia Divina (Divine Justice), published by Chiarelettere and released on November 9, 2018.

They discovered that these safe houses are located in Italy from the North to the South, small enclaves of hidden Vatican power unknown to most people on the outside, and I am sure you could find many such places all over the US very easily. In their mission, they were sometimes welcomed by the clergymen from these safe houses, but most of the time, they were not. The investigative journalists counted at least eighteen safe houses in Italy during their research and studies, where they worked on site; interviewing, mailing, calling people; cross-referencing data from diocese yearbooks and the news from local newspapers to confirm their stories. Their map could even be lacking information because of the struggle to find data due to a strong privacy of confidentiality that cover clerical activities, as the Vatican always tries to avoid public scandals.

Generally, these centers or safe houses, are something in between a psychiatric hospital, for pedophile priests in search of a cure, who spontaneously ask for help from their “colleagues” after becoming aware of their “attraction” to children, or places of detention, for priests who are actually in trouble with the Italian Law and ask to serve their precautionary measures or house arrests in such houses. In other cases, there are safe houses for foreign priests on the run from the police in their own countries.  These centers are, in fact, the institutions where the Church allegedly cures, but above all controls, priests that have been convicted for child abuse by the Congregation for the Doctrine of the Faith.

However, the Holy See has refused to report to the United Nations (specifically to the two different United Nations Commissions that in 2014 were monitoring the violations of the UN Convention on the Rights of the Child and the UN Convention against Torture), so realistically, these houses are “soft” places of detention – no jails no guards – an alternative to the Italian detention centers, where potential criminals who have committed felonies and are held in custody are not reported by their superiors to the police. This happens just because, according to a religious point of view, these people are first and foremost sinners so they should be punished as sinners by God, not as criminals by Justice. This is truly insane and needs to be addressed, also in the United States!

Moreover, these safe houses, known as “houses of atonement” are surely just the tip of the iceberg. Talking with a priest that is also a psychotherapist, the authors of the book found out that only in Italy, during the last thirty years, the secret network for the assistance of priests in crisis has grown larger each day, just like in the rest of the world.

This network of safe houses built by the Vatican to protect pedophile priest from the law is made of parish and clergy houses, clerical communities and private houses ready to welcome for some weeks, months or more, any priest that, according to his superiors, needs to “take a break.” For example, each of the one hundred and twenty dioceses in Italy has established one of these safe house institutions built to isolate any “Son of the Church” willing, or at times even unwilling, to take a path to rehabilitation, atonement, and expiation. They disappear from the public eye to avoid further scandals, and that’s the real priority of the Catholic Church.

So how do these centers operate? How are they financed? Well, they operate in the most absolute discretion and confidentiality. They host priests and nuns from a variety of different backgrounds, who they aid in escaping justice. Child abuse is not the only crime committed by clergy, even if it is the most prevalent one. There are the stalker nuns, for example, the murderous priests, and homosexuality, which is still a sin for the Church and must be expiated away from prying eyes. There are priests suffering from gambling addictions and those obsessed by regular porn sites. Certainly, a minority compared to the pedo’s, but still quite numerous.

According to the Catholic Church, this is, of course, all the devil’s fault, and it is unlikely that something will change in the future. So we need to expose the fact that the Vatican not only knew for a long time about the terrible crimes committed by its clergy, in almost every dioceses in the world, and is actively protecting them from justice with the establishment of safe houses built for this purpose, acting more as a criminal organization, not a religious institution.

Leo Zagami is a regular contributor to Infowars and the author of the book Confessions of an Illuminati Volume 5: The Decline of the West and the Rise of Satanism in our Society