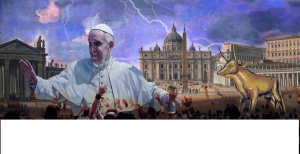 Rome, Vatican City, November 17 -The Italian Bishops Conference- (CEI) Italy is shocked after hearing that the text of the Lord’s Prayer (the Our Father) would now change. The Lord’s Prayer (also called the Our Father or Pater Noster) is a venerated and classical Christian prayer which, according to the New Testament, Jesus taught as the way to pray:

Two versions of this prayer are recorded in the gospels, a longer version, the Sermon on the Mount in the Gospel of Matthew, and a shorter version in the Gospel of Luke when one of his disciples said unto Him,“Lord, teach us to pray, as John taught his disciples,”  but now there will be a brand new Jesuit version submitted to the Holy See, with Papal approval.

Instead of saying, “lead us not into temptation”, the new version will say, “do not abandon us to temptation.”  The Jesuit Pope also changed the beginning of the Gloria to “peace on earth to men beloved of the Lord.”

Last year, in an interview with an Italian TV network, the pontiff  stated that the current language of the Our Father prayer “is not a good translation.”

In English and similarly in Italian, the prayer asks God to “lead us not into temptation, but deliver us from evil.” But, says Francis, it’s not the Lord that tempts. “It is not He that pushes me into temptation and then sees how I fall,”

Francis said in Italian. “A father does not do this. A father quickly helps those who are provoked into Satan’s temptation.”Francis also pointed out last year, that France’s Catholic church already adopted new phrasing in its Notre Père.

While the Catholic Church is embroiled in an unprecedented worldwide crisis involving charges of pedophilia, the Pope seems to think that the solution is changing the text of the Lord’s Prayer (Our Father), but  Francis’ idea of changing the Lord’s Prayer is disturbing to many Catholics, who learned from childhood to recite this prayer, and don’t agree with the Pope, who has already angered Catholic traditionalists in so many ways.

In the meantime, the Jesuits announced yesterday the beatification of Father Pedro Arrupe, the legendary Superior General of the Jesuits from 1965 to 1983. The announcement was made by the Black Pope himself, Father Arturo Sosa, the Jesuit superior who announced the sainthood of his predecessor who led the Society of Jesus in the post-Council years. In a letter to the Jesuits, the current superior announced that the session that will formally open the cause of the “Servant of God” will take place on February 5, 2019, in the Basilica of San Giovanni in Laterano in Rome.

General Pedro Arrupe SJ, of Spain, was, of course, a controversial figure in-line with the present liberal policies of the Church promoted by the Jesuit Pope Francis. Arrupe, who is described by some Christian researchers as one of the most evil men of the Twentieth Century, became the master of infamous Cardinal Francis Spellman, and directed the pro-socialist-Communist Uncivil Rights Movement (via Spellman’s Jesuit John LaFarge), while overseeing at the same time in secret, the IRA’s anti-Protestant rioting in Protestant Belfast, Ireland. He was not a Saint, that’s for sure, but everything is different after the Vatican take over by the Jesuits.Former Bishop Gerard Bouffard of Guatemala once said the Vatican is “the real spiritual controller”of the Illuminati and New World Order, while the Jesuits through the Black Pope, are actually in control of the Vatican hierarchy and the whole Roman Catholic Church. With the arrival of the first Jesuit Pope in 2013, the Jesuits now control absolutely everything,  giving them the unprecedented possibility of making Saints out of demons, as in the case of Arrupe,  and by changing the text of the Lord’s Prayer and the Gloria.  They need to be stopped before they destroy the last remains of the Catholic Church!