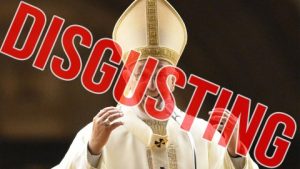 The Vatican is under profound scrutiny and criticism after Monday’s shock announcement that they requested the U.S. Catholic Bishops to delay voting on new standards for survivors of sexual abuse and bishop accountability. The US Bishops, who were attending the fall meeting of the U.S. Conference of Catholic Bishops, were indeed surprised by the decision, and expressed a mixture of disappointment, acceptance, and frustration about the news. Angry victims and activists fromBishopAccountability.org, which compiles data on clergy abuse in the church, were present in Baltimore outside the hotel where the Conference of US Catholic Bishops took place, and became increasingly frustrated, some shouting in despair that this was “totally unacceptable!!”

Meanwhile, on Monday morning, two survivors of clerical sexual abuse spoke to the US Conference of Catholic Bishops about their own personal experiences and their hopes for the future of the Church.  One survivor, Luis Torres, even asked the US bishops in a touching testimony, to make changes to ecclesial policies and culture that might ensure that sexual abuse or coercion by anyone in the Church, including bishops, is put to an end. “I ask,”he pled, “that you inspire me and our community to faith and hope through your courage and your action, which is needed right now. Not in three months. Not in six months. Yesterday.”

Yes, the victim said “yesterday”, not today, showing profound frustration, but Pope Francis doesn’t care about the victims of pedophilia, or the future of the Church in the United States, he really only cares about his own future. In September 2018, Pope Francis convened all the Episcopal Conferences worldwide for a general meeting to take place in Rome in February 2019, to discuss the prevention of abuse of minors and vulnerable adults. It seems the Argentinian Pope wants to impose his own view before leaving office, not tolerating any further interference from the US Catholic Bishops.

For this reason, Cardinal Daniel DiNardo, president of the US bishops’ conference, was forced to communicate with American bishops, telling them that they will not vote on the two key proposals which were expected to form the basis for the US Catholic Church’s response to the sexual abuse crisis. They will simply have to wait until February 2019, another delay to facilitate the ongoing cover-up of the many crimes commited in the US by the Catholic Church, involved, as we all know by now, in Satanism and sexual abuse of minors on a scale never seen before.

Never mind if DiNardo said that the U.S. bishops remain committed to their proposals,

the US bishops’ general assembly meeting in Baltimore will conclude today amongst profound disappointment by US Catholics, and even part of the clergy aside from Pope Francis’ loyalists like Cardinal Blase Cupich.

The meeting with the Pope in Rome will take place in the Vatican from 21st to the 24th of February 2019, exactly 6 years after the resignation of Pope Benedict XVI, and during this occasion some trusted sources say Pope Francis will announce his own resignation,  conveniently issuing a papal conclave for all present entitled to vote.

11 thoughts to “The Vatican is preparing for the Pope’s resignation in February 2019 and US Bishops are disgusted!”