Yesterday, Don Paolo Glaentzer, a 70-year-old priest from the Province of Florence, was arrested during the aggravated sexual assault of a 10-year-old girl. A man spotted the suspicious car containing the priest and the little girl, who was half naked, while he was driving in the parking lot of a supermarket in the town of Calenzano, and immediately asked for help from people nearby.

Don Paolo Glaentzer was nearly lynched by an angry mob, which was eventually stopped by the Italian police with great difficulty.

“The little girl had her pants and  shirt pulled down and we blocked the priest” said one of the people who intervened to stop the priest just before the arrival of the Carabinieri Corps and the police. This sick pervert priest, who is now under house arrest, admitted during the interrogation that it was not the first time he had sexual encounters with this girl, who  incredibly he accuses of taking the initiative. 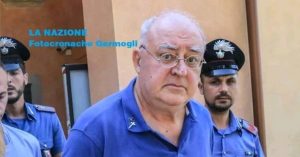 Don Paolo Glaentzer during his arrest

Meanwhile, the main Catholic weekly magazine in Italy called Famiglia Cristiana, has compared the populist Interior Minister Matteo Salvini to Satan, because of his uncompromising stance over immigration. “Go Back Salvini”, the influential magazine announces on its front cover. It is a clear reference to VADE RETRO SATANA ,”Go Back Satan”, a Medieval Catholic formula for the exorcism of possessed persons, recorded in a 1415 manuscript and found in the Benedictine Metten Abbey in Bavaria; its origin is traditionally associated with the Benedictines.

However, the magazine wrote “Nothing personal or ideological, it’s just the gospel,” going on to quote numerous Italian bishops highly critical of Salvini’s move to block the arrival of immigrants from the country’s ports.

In the meantime, Salvini, who is still in good spirits, joked, “They are comparing me to Satan? I don’t deserve that.” 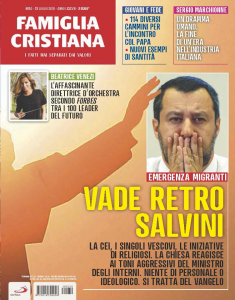