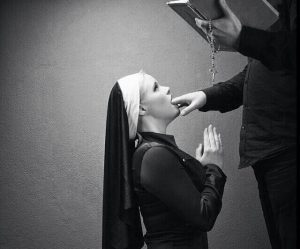 It has been called “the last taboo”of the Roman Catholic Church; nuns sexually abused by priests and bishops. One nun recently stated to the Associated press, “It opened a great wound inside of me”adding, “I pretended it didn’t happen.” Unfortunately, this is another big problem that the Roman Catholic Church has tried to bury.  In 2001, my friend, Philip Willan, a journalist who lives in Rome, revealed in The Guardian that, “Roman Catholic priests and bishops in several parts of the world have been exploiting their religious authority to obtain sexual favors from nuns, in some cases resorting to rape and subsequently obliging the victims to seek an abortion. Reports of widespread sexual abuse were compiled by two senior nuns between 1994 and 1998 and passed to the Vatican, reported by La Repubblica and the Italian Roman Catholic news agency Adista.”

Unfortunately justice didn’t prevail after Willan’s shocking article, but after decades of silence, the Associated Press now reports that a growing number of nuns from all over the world are finally coming forward with reports of sexual abuse by the Catholic hierarchy. The Associated Press admits that the Vatican has been aware of the problem for a long time, but has done nothing to stop it.

Yesterday, Pope Francis accepted the resignation of Theodore McCarrick, from the College of Cardinals, after a series of sexual misconduct allegations. The new erupting scandals involving nuns is yet another for the Vatican, that is already struggling with the daily pedophilia scandals surfacing across the globe almost daily.

The cases of sexually abused nuns that are emerging involve the continents of Europe, Africa, South America and Asia, showing that the problem is global, especiallyin Third World countries where it seems like another form of sexual slavery, thanks to the status of second class citizens that is given to women in the Catholic church. However, some nuns are now making their voices heard, showing that it’s not only children that fall victim to sexual abuse when there is an imbalance of power in a relationship, something we have often noticed in the past in sectarian realities.

The Catholic nuns are beginning to publicly denounce years of inaction by church leaders, even though major studies on the problem in Africa were reported to the Vatican in the 1990s. The problem was completely ignored by Pope John Paul II and Joseph Ratzinger, the powerful Prefect of the Sacred Congregation for the Doctrine of the Faith in charge of the Catholic doctrine, during that time.

Wearing her religious habit and grasping a rosary in her hand, a nun revealed to the Associated Press, that back in the year 2000, a priest that was taking her confession sexually assaulted her in the middle of the sacrament. This was not the only assault, and a subsequent approach by another priest a year later finally led her to stop going to confession with a  priest other than her spiritual father, who lives in another country. The extent of sistematic abuse against nuns from around the world is yet unclear, however, this week, about a half a dozen sisters from a small religious congregation in Chile came out with their stories of abuse on national TV, and how their superiors did absolutely nothing to stop it.

A nun in India recently presented a formal complaint to the police accusing a bishop of rape, which would have been unthinkable only a year ago. New cases in Africa have emerged periodically; in 2013, for example, a well-known priest in Uganda wrote a message to his superiors that referred to a number of “priests romantically involved with religious sisters,”which he was promptly suspended for by the Church until he apologized, in May of this year.

The Vatican has remained silent on what measures have been taken to assess the extent of the problem at a global level, or to punish the guilty, explaining that, “It is up to the local Church leaders to sanction the priests who sexually abuse nuns.”Last June, the French newspaper Le Parisienrevealed a potential “huge scandal”for the Catholic Church, summarizing some of the cases involved to include; “a nun raped by a monk in a monastery, a nun who was the victim of a priest in the confessional room,”and “a nun who was sexually assaulted by another sister of her own congregation.”

In a great majority of cases, the nuns remain silent, and if they eventually recount their ordeal, it’s only because they have left the church. The phenomenon is considered to be“much wider”than previously imagined, explained Francois Devaux president of the French association La Parole Liberee, pointing a finger at those “priests who abuse their position of spiritual authority to take sexual advantage of others.”

One thought on “Nuns, the latest victims of sexual depravity in the Church”