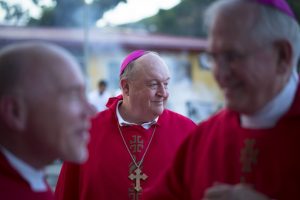 While all eyes are on Cardinal George Pell, who in June of last year became the highest-ranking Vatican official to face criminal charges involving accusations of sexual offenses, yet another Archbishop was found guilty of covering up the sexual abuse scandal in Australia’s Catholic clergy.  67-year-old Archbishop of Adelaide, Philip Edward Wilson, failed to report allegations of child sexual abuse inflicted on altar boys back in 1976 by a pedophile priest named Father Jim Fletcher, who died in jail in 2006.The extensive cover-up of pedophilia exercized by the most senior members of the Catholic Church, not only in Australia, but all over the world, pushed the Catholic Bishops of Chile to resign last Friday. Let’s remember that a government inquiry  found that in Australia 7% of Catholic priests working in this country between 1950 and 2010 have been accused of Child sexual abuse. It’s outrageous how these resilient individuals are not resigning or even attempting an act of forgiveness  as the Chilean’s did.

Wilson, who is Australia’s highest ranking Catholic Church official to actually  be convicted for his crimes, is facing two years of jail.

He studied Canon law in Washington D.C. where he received a Licentiate of Canon Law, and was made a Prelate of Honour by none other than Pope John Paul II (now a Saint…)  We are left wondering how is it possible that  back in 2002 it was Wilson himself who became the first Australian archbishop to be invited to address a historic session of the United States Conference of Catholic Bishops in the wake of an emergency meeting with Pope John Paul II regarding the same crime of sex-abuse within the Church, that he is now being accused of covering up. Officially, Wilson was selected to address the conference because of his experience dealing with clerical crimes, while he was Bishop of Wollongong, but in reality he was appointed because of his extensive experience in covering up such terrible crimes. Once again, shame on the Catholic Church for allowing such criminals to conduct their affairs.