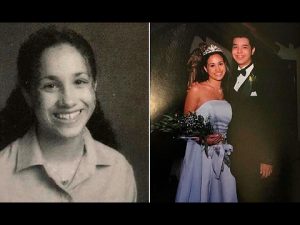 Royal wedding fever has caught on in many places, but it has a particular soft spot at the rather strange Immaculate Heart Middle School and High School outside Los Angeles, the liberal Catholic school that Meghan Markle attended from seventh to 12th grade.

In the summer of 1967, the Sisters of the Immaculate Heart of Mary (IHM), a Catholic religious teaching institute for women under the unusual tutelage of the psychologist Carl Rogers, who apparently taught self-assertion, voted to leave their strict Catholic tradition, and told their Canonical superior that if he did not like it they could leave his schools. The supervisor refused, and the order eventually split, as the Vatican was still rather conservative before left-wing ideology took over the show .

The 60 or so who wanted to remain Sisters were given a new home, but three nuns who wished to retain their original charism, left and founded a flourishing branch in Wichita, Kansas. No new vocations came to those who remained in Hollywood , and they are now down to a couple of nuns, after one died unsuccessfully trying to stop the sale of the convent to the pop star Katy Perry, an outspoken advocate for the LGBTQ community, who then went on to meet her hero, Pope Francis, to thank him personally for her new home.

Yet the Immaculate Heart High School in Los Angeles, an all-girls institution run by the Sisters of the Immaculate Heart of Mary,has been a place of controversy, even in recent years, allowing a transgender young man, actor Elliot Fletcher, later known for his work on the MTV comedy series “Faking It”, to graduate using his preferred gender identity. Fletcher came out to his parents as transgender in 2013, during his senior year at the High School in question.  A post in the Facebook group for the class of 1970 includes the following caption for the above picture:

“Meet our alumni brother. This was not an easy decision for the administrators to make, but they did the right thing as Immaculate Heart does. {He] is the first transgender graduate, but probably won’t be the last. He loves the school as much as the rest of us and that’s all that matters. ‘Every loyal daughter and son…’”

Immaculate Heart School remains all-female to this day, aside from the transgenders, where after the 60’s revolution this institution was transformed into a Communist recruit center. Kate Sullivan, who graduated in 1988, wrote: “As I recall, the line between political assembly and liturgy was fairly thin in my early days at IH – and that felt perfectly natural. It was no big deal to receive Communion from the nuns, or to hear a sermon delivered by a woman, or to sing ‘We Are a Gentle Angry People.”