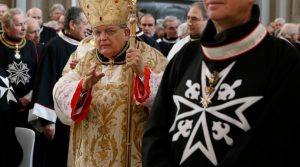 They made the initiative public on Nov. 14, 2016, when it became clear the Holy Father would not respond.On the matter of the Four Cardinals’ dubia, Cardinal Burke explained that they have a duty to respond to the confusion caused by the papal document Amoris Laetitia.

Burke said at the time:

“There is so much confusion that we, first of all, asked the Holy Father to clarify please these questions, these fundamental questions. […] Because there is a very dangerous confusion, and also, with the confusion come divisions. Priests against priests, and disagreements among fellow Catholics about whether you are able to receive the Sacraments, if you live in an invalid marriage union. We even find disagreements among the Bishops, and this should not be…This is not for the good of the Church.”

However, Cardinal Raymond Burke’s concerns are not only based on matters of faith, he is also opposing the left-wing take over of Pope Francis and his Communist buddies, and allies in the church, who back his message of inclusion and support for immigrants sponsored by George Soros.

A controversial meeting between Burke, who is  regarded as being close to Trump, and Matteo Salvini aright-wing Italian nationalist who is a staunch supporter of president Donald Trump,  reportedly took place last February  in Burke’s home in the Vatican that lasted an hour and a half, according to a report by Francesco Grana, a Vatican journalist. Cardinal Burke fears the possibility of excommunication by the Vatican declaring to LifeSiteNews:

“I have envisioned such consequences” of resisting the Pope including excommunication. “Yes, the consequences could be very severe,” he said. “One has only to remember how Saint Athanasius, for example, was exiled for

defending the truth of the two natures in the one Divine Person of Our Lord.”

An event Rome in May may start a new schism in the Catholic Church.

“On May 17-18 life, family, and faith leaders will gather in Rome to strategize on the  current crisis in the Vatican at the annual Rome Life Forum. The event will feature two leading voices of faith to Catholic teaching, Cardinal Raymond Burke and Bishop Athanasius Schneider. It will be an opportunity to gather the faithful from around the world to intercede for the light of the Holy Spirit, to guide the Church in this time of great crisis.

To register for the Rome Life Forum click here.”