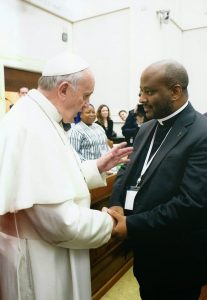 Don Mussie Zerai is among the supporters of an indiscriminate “invasion” of refugees and illegal immigrants. He is a priest, and a fan of Pope Francis, who in the past, supported the Syrian rebels close to Al-Qaeda, and was a candidate for the Nobel Peace Prize in 2015.

based in Rome and founded in 2006, for years has been the benchmark of migrants crossing the Mediterranean. Now he is under investigation for aiding and abetting illegal immigration: his name appears in a criminal investigation in Trapani, (Siciliy) on the NGO’s involved in human trafficking.