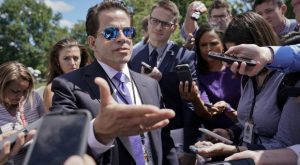 Nomen (est) omen in Latin means “the name is a sign”. A name is supposed to suggest certain traits of personality (if you talk about a person) or behavior. I’m not sure how to explain this any clearer, but Scaramucci in Italian is a derivative of “Scaramuccia”. Scaramuccia in Italian, means “skirmish”, a Battle of short duration, and minimum influence, on the final outcome of war. So no big deal Anthony Scaramucci, whose name was definitely a sign of things to come, is out as White House communications director, after only 11 days on the job – and just hours after former General John Kelly took over as President Donald Trump’s new Chief of Staff.