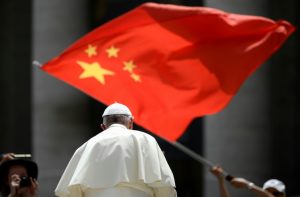 The Vatican is helping China to advance global Marxism and ignore Hong Kong in exchange for billions of dollars in annual payments. The Chinese Communist Party (CCP) has been sending 2 billion U.S. dollars annually to the Holy See since 2013, the year the Jesuit pope took office.

This criminal behavior of the Church of Rome in favor of the CCP was recently confirmed by the author of the book Viganò vs. the Vatican who said that the pontifical blackout on Hong Kong could be also due to: “The famous secret agreement signed between Beijing and the Holy See, whose consequences are being heavily felt in the lives of many Chinese Catholics, despite the propaganda of the Vatican media.”

Another Vatican expert Christopher Altieri, Catholic Herald’s Rome Bureau Chief, confirmed the omission of the Hong Kong topic by Pope Francis stating: “The issue is too momentous to treat it as just another of the audibles that have become almost run-of-the-mill during this pontificate.” Vatican observers understand that the strange silence of the pontiff on Hong Kong confirms that you can buy the Catholic Faith for $2 billion a year.

Now Hong Kong Catholics say Pope Francis has rejected their appeals to take a stance against Beijing’s aggressive suppression of the protests, but when questioned directly about the crisis, Francis simply compared them to demonstrations over economic inequality in Chile, France, and Spain, adding that he: “Would like to go to Beijing” incredibly stating “I love China.”

Well, of course, Bergoglio loves China, they are giving him $2 billion a year to buy his silence and complicity, and let’s not forget that deal between China and the Vatican seems traceable to the disgraced pedophile and former Cardinal Theodore McCarrick.

4 thoughts to “The Vatican sold the “Catholic Faith” to China for $2 billion a year !”