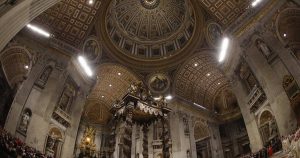 Once again, an extraordinary move by the Vatican police exposes the growing tension in  Vatican finances. On Tuesday, the Vatican police raided the department in charge of maintenance and restoration at St. Peter’s Basilica, seizing documents and computers for an investigation into suspected corruption that is being used to remove some otherwise unremovable figures from the Vatican mafia that have been involved in money-laundering and other criminal activities for years.

The raid was similar to one last October that involved another investigation into a separate department over the purchase of a building in a posh area of London. Officially, the raid came a month after the Vatican published new procurement rules intended to prevent corruption and cut costs, but the truth is that the Vatican is worried about the upcoming scheduled inspection by Moneyval. The Holy See Press Office said Tuesday that the police acted under orders from Vatican prosecutors in response to a report by the city state’s auditor general.

The Vatican also said that Pope Francis has appointed a retired papal diplomat and known Jesuit agent, Archbishop Mario Giordana, to serve as the extraordinary commissioner of the Fabbrica di San Pietro, which manages the operation and maintenance of the basilica. The archbishop in question has been assigned the job of “updating the statutes, clarifying the administration and reorganizing the administrative and technical offices” of the Fabbrica. The unusual step of appointing a commissioner removes responsibility from the powerful Cardinal Angelo Comastri, who has served as president of the Fabbrica since 2005 but has also been accused of covering up the abuse of underage altar boys who served in St. Peter’s Basilica.

The new rules which Archbishop Giordana will be applying at the Fabbrica finally exclude those convicted of fraud, money-laundering, tax evasion, or participation in organized crime, as well as companies based in internationally recognized tax havens, from bidding for Vatican contracts like in the past.

In the meantime, the Vatican’s financial watchdog authority reported on Friday, July 3, 2020, that it received 64 suspicious activity reports in 2019, 15 of which was forwarded to the Promoter of Justice for possible prosecution. In its annual report, released July 3, the Financial Intelligence Authority (Autorità di Informazione Finanziaria, or AIF) hailed “the rising trend in the ratio between reports to the Promoter of Justice”and cases of suspicious financial activity.

The Vatican police raid and the report comes ahead of a scheduled inspection by Moneyval, the Council of Europe’s anti-money-laundering watchdog, which has put pressure on the Vatican to prosecute breaches of financial regulations. Unlike in previous years, the report was not presented at a Vatican press conference as the Holy See wants to avoid publicity on such matters that will highlight Vatican corruption.

The AIF was established in 2010  by Benedict XVI, who is now back in Rome after a visit to his pedophile brother, now deceased. The institution was built to oversee the regularity of Vatican financial transactions. It is charged with ensuring that internal banking policies will eventually comply with international financial standards. However, this has been an almost impossible mission for the corrupt Vatican financial sector that has been the number one money-laundering facility for the Italian mafia and many drug cartels for decades, as Mother Teresa once said, she didn’t care where the funds originated as long as they were put to good use. Of course, Mother Teresa’s Sainthood is a fraud, just like the Vatican 2 Catholic Church.