Francesco Pazienza and Riccardo Sindoca in a recent pic…

From the registered office in Via del Mare, in the Lazio region of Italy in an official Italian authorized fiscal assistance center known as CAF, a group of shady Italians characters working for Vatican Intelligence ran a paramilitary organization presenting itself as an NGO recognized by the Italian government that went beyond Italy’s national borders called CO.S.INT an acronym that stands for International Sanitary Corps  (Corpi Sanitari Internazionali– http://www.corpisanitariinternazionali.it).

On the homepage of the Corps in question, it is said they descended from the Garibaldi Legion of 1860 and there are plenty of images of illustrious public events with their officers in high uniform in front of important personalities of the religious, military, and political world. Incredibly enough, the semi-militarized force often referred as the “Garibaldina Red Cross” to imitate the legitimate Red Cross organization, have been regularly seen in the Vatican in spots usually reserved for military authorities and diplomats in the very churchyard of St. Peter’s Square during weekly meetings with Pope Francis.

No one would have imagined that the members of the “Garibaldina Red Cross,” which gathers hundreds of members and volunteers throughout Italy and divided into 11 regional districts, was actually a fake institution with hidden irregularities that was mimicking both the Red Cross and the Italian police force in order to cover up for pedophilia and other illegal activities for the Vatican elite and the Illuminati, who originally founded them. 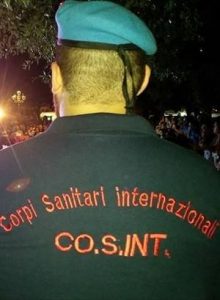 All this is confirmed by the history of the group still available at: http://www.corpisanitariinternazionali.it/chi-siamo/  where they clearly state that they were in fact reconstituted in 1986 and officially authorized in January 1988 by the late P2 member and politician Prince  Giovanni Alliata Di Montereale, who was for many years the Sovereign Grand Commander of the Ancient and Accepted Scottish Rite of Freemasonry in Italy and a member of the Illuminati of the New World Order, as it is stated in the current Wikipedia voice: https://it.wikipedia.org/wiki/Giovanni_Alliata_Di_Montereale

Yesterday morning a police division from the town of Velletri and a unit of the Guardia di Finanza, the branch of the Italian armed forces responsible for fighting financial crime, busted into the offices of the organizations around Italy after denouncing their Commandant-generalAlessandro Della Posta, his vice general Donatella Convertini, and a third general named Mario Giarolo, for their illegal activities.However, the real leader of the group is Riccardo Sindocawas neither denounced or arrested yesterday: http://www.sindoca.com/CorpiSanitariInternazionali.htm 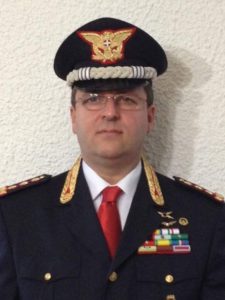 For years, members of the CO.S.INT. who have openly proclaimed to be a part of Operation Gladio, a NATO-backed paramilitary network established after WW2, went around Italy undisturbed using fake police cars and ambulances to engage in illegal activities on behalf of the Jesuit-led New World Order.

Riccardo Sindoca, who is a well known fascist and Freemason in charge of the CO.S.INT. operation, also reported by VICE: https://www.vice.com/it/article/mvm9gp/riccardo-sindoca-agente-segreto-massoneria-fascismo  officially runs BIOCOFF, a self-described “emergency group” connected to the U.N. and the WHO described on their official website as an organization: “Designed for a use of the first and immediate emergency in those scenarios catastrophe which, by their nature, foreshadow the management of a large number of victims.”  This is the website in question if you want to investigate the matter further: http://www.biocoff.com/English.htm

Riccardo Sindoca’s mentor is the still alive and kicking Francesco Pazienza, one of the shadiest figures in the Italian intelligence milieu, who was involved with the P2 scandal and the murder “suicide” of Roberto Calvi,  the Italian banker working for the Vatican dubbed “God’s Banker,” who was found dead hanging upside down beneath Blackfriars Bridge in June 1982.

Francesco Pazienza, who was very close to Pope John Paul II, left the Italian military intelligence agency, known as SISMI, immediately after the P2 scandal erupted in 1981, taking refuge in the United States, but was eventually extradited in 1986. He was paroled in 2007 after serving two decades in prison for various convictions, including a 1993 conviction due to his role in the Banco Ambrosiano scandal connected to Robert Calvi and a 1982 conviction for mishandling state secrets connected to the 1980 Bologna bombing that was allegedly conducted by Operation GLADIO and the P2.

The Vatican has always used people like Sindoca or Pazienza for their dirty work, but now with Donald J. Trump in the White House, Italy’s authorities are under pressure to stop the illegal operations of the International Sanitary Corps who have been used over and over again by the Vatican pedophile elite for their dirty deeds in Italy and abroad. In the meantime, the Pontifical Academy of Sciences is also under pressure at the moment to finally announce and admit their successful trial of the AIDS vaccine invented in 2005 by Dr.Paolo Trevisanato and announced back then in this official publication by the Church:  http://chirignago.altervista.org/proposta/20050814.pdf