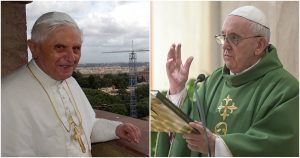 Controversy has erupted again in the Catholic Church because of a  book on the priesthood that was supposed to bear the signatures of none other than Pope Emeritus, Joseph Ratzinger and traditionalist Cardinal Robert Sarah, Prefect of the Congregation for Divine Worship. The release of the book that is supposed to come out on January 15th, might be delayed after the former Pope Benedict suddenly asked for his name to be removed as co-author.

This unprecedented change of plans was communicated earlier today by his personal secretary after anonymous inside sources told leozagami.com that Pope Ratzinger had his life threatened by the Jesuits if he didn’t remove his name from the project as soon as possible. The pre-publication material provided by Le Figaro showed that with his contribution, the authors were entering into a dangerous controversy with Pope Francis on the topic of celibacy and the possibility of ordaining married men as priests, a controversy that could have inevitably brought the Church to a schism.

Pope Ratzinger and Cardinal Sarah, who described themselves within the project as two Bishops “in filial obedience to Pope Francis” who “are seeking the truth” in “a spirit of love for the unity of the Church” defended the discipline of celibacy in the new book and put forth the reasons that they feel counsel against changing it. But the Jesuits and Pope Francis have convinced Pope Benedict XVI to desist for his own good as the Church of Pope Francis has other plans.

In the meantime, Cardinal Robert Sarah, who was sought as the possible next pope, is having extreme difficulty as many want his head on a platter and out of the future papal conclave.Open a liberal Catholic periodical in the last few years and you are likely to find a call for the dismissal of the Guinean cardinal who is now being put in great difficulty by Pope Ratzinger, who was forced to back track for fear of being killed.