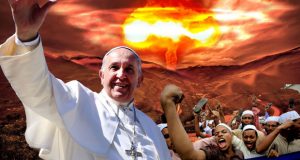 Pope Francis recently told a group of high school students that they should not convert people Christianity, but the Jesuits and Pope Francis are trying to convert most Catholics to left-wing ideology/Communism. The Pope also said on Christmas Eve not to let Church failings distance you from God.

After the recent publication of the scandalous new book entitled, What Is Man? An Itinerary of Biblical Anthropology (“Che cosa è l’uomo? Un itinerario di antropologia biblica”), released on December 16, 2019, you can see that the Pontifical Biblical Commission (PBC) is firmly in the hands of the Jesuit Order, that aims officially to examine the scriptural understanding of the human person, but is another leftist propaganda tool to destroy the Catholic Faith from within.  In this new book of heresy carried out at the express wish of Pope Francis as stated by one its creators, Jesuit Father Pietro Bovati, who is the secretary for the Pontifical Biblical Commission, we find a strange depiction of homosexuality and the true reasons behind the end of Sodom and Gomorrah related not to the decadence of these two cities but rather to their unhospitable ways.

An informed source in Rome commented on the book’s treatment of homosexuality for Lifesite News saying: “This book is utter banality, which is evidenced first and foremost in the fact that it can be abused by everyone.” The commission examined several Old and New Testament passages (Gen. 19, Judges 19, Lev. 18:22 and 20:13) and came up with a bunch of pro-liberal nonsense. The Jesuit authors of the text observe that in, “passages of the Hebrew Bible which refer to Sodom’s guilt, there is no allusion to a sexual transgression practiced against people of the same sex.”Instead, they note, these passages (Isaiah 1:10; Jeremiah 23:14; Ezekiel 16:49) speak of “betrayal,”of “adultery,”and of “pride”comparing the refusal of Sodom to let in the two angels of God (Genesis 19:1) to the refusal of populist government to let in the immigrants.

They are changing the traditional understanding of the sin of Sodom, the Pontifical Biblical Commission makes this extraordinary claim that has no relationship to Biblical truth but a clear link to George Soros’s agenda: “The story, however, is not intended to present the image of an entire city dominated by irrepressible homosexual cravings; rather, it denounces the conduct of a social and political entity that does not want to welcome the foreigner with respect, and therefore claims to humiliate him, forcing him to undergo an infamous treatment of submission.”

Sodomy, according to a 1913 Catholic Encyclopedia article, is considered a capital sin but that’s no longer the case for the LGBTQ friendly Pope and his prevalently homosexual commission:“This way of reading the story of Sodom is confirmed by Wisdom, (19:13–17) where the exemplary punishment of sinners (first Sodom and then Egypt) is motivated by the fact that they had shown a deep hatred towards the foreigner.”

No wonder Pope Francis used his Christmas address on the 25th of December 2019 to praise and glorify illegal immigrants that usually end up exploited by the perverted clergy of Rome. On a day typically reserved to set politics aside and remember the Christ-child’s birth, the first pope belonging to the Jesuit Order preached Liberation Theology and his Communist agenda instead of the traditional Christmas narrative.

3 thoughts on “Incredible: Pope transforms Sodom and Gomorrah into an immigration issue!”