Lizards have waterproof skin but no sweat glands, they don’t sweat and they don’t lose much water through evaporation just like Prince Andrew, whodenied having sex with a teenager at the center of the Jeffrey Epstein scandal because he said he can’t sweat. So is he a reptilian, for real?

No, this is not a joke, Prince Andrew claimed in a rare interview with the BBC that he has a medical condition from the Falklands War that makes him unable to perspire, in defense of the claims that Giuffre made in a recent interview with 60 minutes Australia that when she met Prince Andrew he was sweaty and smelled funny. The only one that could confirm this improbable thesis is David Icke with his outlandish reptilian theory, but we all know that the prince is lying to save the reputation of the Royal Family. 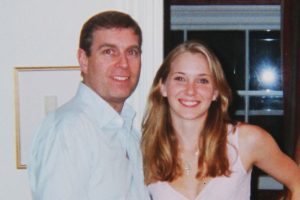 Caught in a photo with his accuser, Virginia Roberts Giuffre, that in the last few months has been viewed by millions of people around the world, Prince Andrew said to the interviewer that he had “no recollection”of  ever meeting her. Andrew almost questioned the authenticity of the photograph, however, when confronted with more details on Giuffre’s claims, Andrew then recalled taking his daughter to a party at a Pizza Express that afternoon. Could that be a secret coded message to his Pizzagate buddies on the other side of the Ocean?

We all know that pedophiles use a coded language that he might have learned from Jeffrey Epstein. Asked if he regretted the friendship with Epstein, Prince Andrew incredibly said no because, “the people I met and the opportunities that I was given to learn either by him or because of him were actually very useful.”

So what did Andrew learn from Jeffrey Epstein,a symbol of the moral degradation of the U.S. and U.K. elites? We know the elite are heavily into sharing pedophilia and Satanism because these are ways to prove they are sociopathic enough to be trusted with great crimes, and prove that they can trust one another, as they all have dirt on each other.  Prince Andrew will never tell the truth about the late Jeffrey Epstein but the reference to the Pizza Express might not be coincidental. One thing is for sure,  Prince Andrew and the Royal family can once again go along with business as usual, and the Royal circus can now continue courtesy of the Queen, who personally approved the BBC interview recorded a couple of days ago in which Andrew denied any wrong doing.  In exchange for his silence, the Duke of York (that is his title) now hopes that he and his daughters will be supported by the Sovereign Grant — money provided annually by the British Government of fools for the Royals who say they uphold the highest standards.