I announced over a  month ago Prince Charles’ arrival in Rome to see the Pope for the canonization of Cardinal John Henry Newman, C.O. (1801 –1890) the first non-martyr English Saint since the Reformation who was also a former Anglican priest. This unprecedented act is regarded as highly important by the Illuminati elite of the New World Order because it is done in preparation for the unification of Christianity and, of course, the upcoming false Church of the One World Religion that will serve the Antichrist. A video of this historic event is present on the site of the Italian newspaper Corriere della Sera:

The Prince of Wales can be seen in the video shaking hands with Pope Francis and complimenting him at the end of a brief chat for about his “battle for the environment.” This is, of course, referencing the ongoing Synod of Bishops for the Pan-Amazon region still taking place in the Vatican that is a very important part of the globalist agenda.

Pope Francis, who calls Prince Charles, “Your Majesty”during the conversation seems very happy about the statement on the canonization made earlier by Charles that was published by L’Osservatore Romano, the daily newspaper of the Vatican City State.

Freemason Prince Charles, who is one of the main proponents of the upcoming one world religion and the future head of the Church of England once his mother dies, received a gift from the Pope, and seemed humbled by the whole experience. Interestingly enough, the ceremony took place during the anniversary of the Miracle of Fátima, which occurred on the 13th of October 1917, when a large crowd gathered in Fátima, Portugal, in response to a prophecy made by three shepherd children. The Sun appeared to “dance” or zig-zag in the sky, careen towards the Earth, and emitting multicolored light and radiant colors.

In an article that appeared a couple of years ago on the “Secret of Fatima”, Steve Skojec, the founder and editor of OnePeterFive, published for the first time in the English language the controversial words of Rome’s chief exorcist, the late Father Gabriele Amorth about Padre Pio and his knowledge of the Third Secret of Fatima. They come from a recently published book written by José María Zavala, entitled The Best Kept Secret of Fatima (El Sécreto Mejor Guardado de Fátima). Zavala interviewed Father Amorth in 2011, and was instructed to keep the interview secret until after the exorcist’s death for fear of reprisal by the Vatican. Fr. Amorth knew Saint (Padre) Pio for 26 years, and it is from this important figure of 20th century Catholic sanctity that he claims to have learned the contents of the Third Secret of Fatima. According to Fr. Amorth, Padre Pio said to him that the Third Secret pertained to the infiltration of the Vatican by Satan and the rise of a “false church” – details that are not found in the Vatican’s official publication of the Third Secret in 2000.

In the interview, Fr. Amorth relates — as he has done elsewhere — that he does not believe the consecration of the world by Pope John Paul II in 1984 was sufficient to satisfy the requirements set forth by Our Lady to avoid catastrophy and he also said that one day Padre Pio told him: “You know, Gabriele? It is Satan who has been introduced into the bosom of the Church and within a very short time will come to rule a false Church.”

Francis’ understanding of the true message of Fatima tells him there is not much time left to sabotage the Church and welcome the Antichrist, and that’s why he is acting fast. Let’s remember,  that many researchers have even claimed that Prince William, the son of Prince Charles, could be the historical Antichrist . The House of Windsor, as all European Monarchy, has Hebrew roots and is linked to the House of Rothschild “the money changers” who are the foremost Zionists and creators of the State of Israel.

Controversial researcher Peter Kling wrote something interesting regarding this subject:

“The logical choice for King of a One World Government would be Prince William son of the goddess Diana. He is under the control of the House of Rothschild and a direct descendant of King David and King Solomon as was Jesus.”

Believe it or not, this might have been the main reason for Pope Francis to declare Cardinal John Henry Newman the first English Saint modern times in front of a very happy Prince Charles, father to the ultimate aspiring Antichrist. 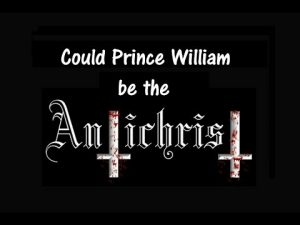 9 thoughts to “The Antichrist, Fatima prophecies and Prince Charles in Rome”