In exploring the various branches of contemporary Satanism or Thelema we often encounter liberal progressive values and politics. The different belief systems of these libtards often reject Western moral laws, replacing them with a combination of a positive self-image and a decided lack of conformity that can aid them in their perverse path towards the Prince of darkness.

There are the Satanic Reds, created in New York in the late 90s, who view Satan as a dark force that has existed since the beginning of time.Its founder, Tani Jantsang, who claims to be a “Generational Satanist” is staunch proponent of Communism. 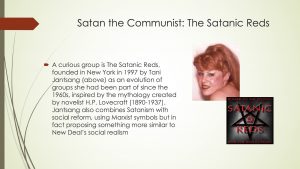 On their site they say openly:”We are SOCIAL REALISTS – this is the HOME of the DARK DOCTRINES, Humankind is a social species, and only by putting People before unbridled profits can the New Agebegin. Workers make everything that is used and enjoyed. The workers have nothing to lose but their chains. We have a world to win and, in that sense only, we are “Reds.” We have Being – SAT. But we must stretch forth and Become – TAN and, in that sense only, we are SaTanists. Satanic Reds, SR., Social Realists. Are you one? See below and see our FAQ.”

It’s seems like satire, but this is an extract from the website of the Satanic Reds, another left-wing group in league with the devil. For the Satanic reds, “Franklin Delano Roosevelt is a Worthy Mentor,”and Christianity is a cult worth exposing because, “For too long the grievous effect of Christian teachings upon millions of people has either been ignored or treated lightly. Christianity should be no more immune from exposure than any other ruling class agency.”

As sick at it may seem, Satanic Reds, whose Satanism has a Communist element, are only one of the many Satanic sects openly embracing the values of the left, like the more known Satanists of The Satanic Temple of Lucien Greaves. The Satanic Reds say they promote Enlightenment, Empowerment, and Becoming/Evolution for the Self, but in reality this is another demonstration that Communism and Satanism are but one in the same.

In one of their articles they also promote “Eugenics in China” saying that: “While striving to control the growth of population in China, our nation’s family planners have simultaneously taken serious note of the importance eugenics represents as a field of inquiry. Eugenics is currently being promoted in China. Although literally it means “superior births,” the essence of eugenics can be found in the expression, “the birth of that which is better,” that is to say, the birth of children whose prenatal characteristics are excellent. Naturally, if one wishes to see that every family is able to produce healthy, intelligent children, then it is necessary to study eugenics, to popularize the knowledge of this field and to master its principles.”

Last week Bernie Sanders described his desire to normalize eugenics. You know who else did that? Hitler. Yeah, Adolf Hitler. Evil  groups such as these also promote the dangerous concept that, “Socialism can’t work if it’s only for some and not for all. ” 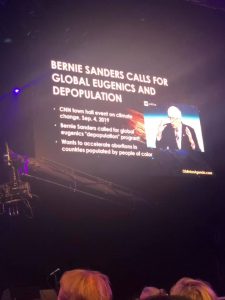 Beware of the Satanic Reds they seek to overthrow all the govenments in the world and enstate the worship of Satan and the communist form of government and economy.

One thought on “Bernie Sanders and The Satanic Reds are Coming For You!”