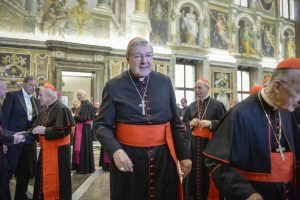 Cardinal George Pell arrived at the Supreme Court of Victoria yesterday, June 06, 2019, in Melbourne, Australia to appeal his six-year prison sentence on charges of sexual abuse. Pell, who turns 78 this weekend, was present in court looking like he had just returned from a spa, not prison.

Dressed in a Roman collar, as he is still technically a Catholic priest, he didn’t wear either his episcopal ring, or is pectoral cross to show his position as cardinal, that is temporarily on hold. He was seen taking notes throughout the proceedings, the hearing ending at 4 pm local time, with the judges reserving their judgment. From this point on, there is no established time frame for their decision and it could come at any time.

George Pell, once the third most powerful man in the Vatican and Australia’s most senior Catholic, is definitely back in the spotlight again. The court could finally make its final decision within a week, or it could take several months to deliver its verdict. In the meantime, some legal experts from the Opus Dei believe that Cardinal Pell has a solid case and a good chance at winning the appeal and apparently they are not being delusional.

Yesterday, the lead prosecutor who sustained the conviction of Cardinal George Pell, suddenly had issues presenting the Crown’s case. Christopher Boyce seemed to struggle in answering certain questions from the three-judge appeal court, even naming by mistake the alleged victim during a live stream of the proceedings.  Boyce, who seemed under great pressure by the Vatican, repeatedly found himself either struggling to articulate his own argument, or at a loss for words under judicial questioning, at one point conceding that “It’s not good enough for me to say what I said before,”  and that, “rehearsing the platitudes may not be all that helpful.”

The prosecutor told the court that the witness, who he accidentally named despite his identity being suppressed by the court, has shown he was familiar with the layout and interior of the sacristy of Melbourne’s St. Patrick’s Cathedral, including renovation work underway at the time of the alleged offences. The alleged victim was a choir member at the cathedral, and his understanding of the interior was not disputed by the defense, who instead pointed to key witness evidence from Monsignor Charles Portelli, the former master of liturgical ceremonies at the cathedral, who testified that Pell greeted congregants at the west door of the cathedral after Mass, and was in his constant company while vested. So Cardinal Pell now has an alibi.

Under questioning from the judges led by Court President Justice Chris Maxwell, who was obviously working for the Jesuits, Boyce struggled to account for what the judge called the “wildly improbable” circumstances of Pell’s alleged crimes. So incredible as it sounds, Cardinal Pell might have his freedom back soon.

The Australian news media greeted Pell’s conviction gleefully, but their blood-thirsty reaction may actually be part of his future salvation. The three judge entertaining his appeal may determine, in fact, that public hysteria caused the retrial jury to render an “unsafe verdict” and might eventually save Pell from prison and from being defrocked.

For this reason, the mainstream media in the days and weeks to come will begin their propaganda to try to convince Catholics and non-Catholics around the world that Cardinal Pell was falsely convicted. Pell is accused of having discovered two choirboys drunk on communion wine in the sacristy of the Melbourne Cathedral during a procession after Mass one Sunday in 1996, and forced each of them to perform oral sex on him in front of an open door, while wearing his liturgical vestments. Pell’s lawyer contends that it is physically impossible to perform oral sex on a man clad in an archbishop’s liturgical vestment and it has been pointed out by the defence that one of the boys, speaking to his mother years later, denied ever having experienced any form of sexual abuse. Unfortunately, he is deceased and unable to contradict this version of the events that will favor, of course,  Cardinal Pell, that by next year could be on his way to beatification if the Australian courts continue this farce.