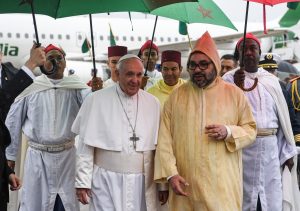 Pope Francis arrives in the Kingdom of Morocco on his first-ever visit to the Maghreb region of Northern Africa and receives a warm welcome from the Muslim country as a new scandal erupts involving a recent statement made by Pope Francis.

Last Sunday, Mar. 17, was the Second Sunday of Lent. The Gospel for the day recalls the Transfiguration of Christ on Mount Thabor (see Lk 9:28-36).

In his Angelus address, “Pope” Francis, therefore, took the opportunity to bring up the controversial subject of sadomasochism which adds a totally strange sexual component to his talk. Pope Francis brought up a term from the sodomite underworld  that surrounds him by stating, “Suffering isn’t sadomasochism: it’s a necessary but transitory passage.”

Here is a complete translation of Pope Francis’ address on March 17, 2019, before and after praying the midday Angelus with those gathered in St. Peter’s Square.

In this Second Sunday of Lent, the liturgy has us contemplate the event of the Transfiguration, in which Jesus grants the disciples Peter, James, and John to taste the glory of the Resurrection: a bit of Heaven on earth. The evangelist Luke (Cf. 9:28-36) shows us Jesus transfigured on the mountain, which is the place of light, fascinating symbol of the singular experience reserved to the three disciples. They go up the mountain with the Master, they see Him immerse Himself in prayer and, at a certain point, “the appearance of his countenance was altered” (v. 29). Used to seeing Him daily in the simple semblance of His humanity, in the face of this new splendor, which also envelopes His whole person, they remain astonished. And Moses and Elijah appear next to Jesus, who speak with Him about His coming “exodus,” namely of His Paschal Death and Resurrection. It’s an anticipation of Easter. Then Peter exclaims: “Master, it is well that we are here” (v. 33). He wanted that moment of grace to be endless!

The Transfiguration happens at a very precise moment of Christ’s mission, namely, after He confided to the disciples that He would have “to suffer many things, [. . . ] be killed and on the third day be raised” (v. 21). Jesus knows that they don’t accept this reality — the reality of the cross, the reality of Jesus’ death –, and so He wants to prepare them to endure the scandal of <His> Passion and death on the cross, so that they know that this is the way through which the heavenly Father will have His Son attain to glory, resurrecting Him from the dead. And this will also be the way of the disciples: no one attains eternal life without following Jesus, without carrying one’s cross in earthly life. Each one of us has his/her own cross. The Lord makes us see the end of this course, which is Resurrection, beauty, after carrying one’s cross.

Therefore, Christ’s Transfiguration shows us the Christian perspective of suffering. Suffering isn’t sadomasochism: it’s a necessary but transitory passage. The point of arrival to which we are called is luminous as Christ’s transfigured countenance: in Him is salvation, beatitude, light and endless love of God. By showing His Glory in this way, Jesus assures us that the cross, the trials, the difficulties in which we find ourselves have their solution and their overcoming in Easter. Therefore, in this Lent, let us also go up the mountain with Jesus! But how? With prayer, we go up the mountain with prayer: silent prayer, heartfelt prayer, prayer that always seeks the Lord. We stay for a few moments in recollection, a bit every day, we fix our interior gaze on His face and we let His light pervade us and radiate in our life.

In fact, the evangelist Luke stresses that Jesus was transfigured “as He was praying” (v. 29). He was immersed in an intimate conversation with the Father, in which the Law and the Prophets also resounded — Moses and Elijah — and while He adhered with all His being to the Father’s Will of Salvation, including the cross, the glory of God invaded Him transpiring also outside. It’s so, brothers and sisters, the prayer in Christ and in the Holy Spirit transforms the person from inside and can illumine others and the surrounding world. How many times we have met persons that illumine, who emanate light from the eyes, who have that luminous look! They pray, and prayer does this: it makes us luminous with the light of the Holy Spirit.

We continue our Lenten itinerary with joy. We give space to prayer and to the Word of God, which the liturgy proposes abundantly to us in these days. May the Virgin Mary teach us to stay with Jesus even when we don’t understand Him and comprehend Him because only by remaining with Him we will see His glory.

One can also see/hear Francis utter the Italian word sadomasochismo in the video provided by Vatican Media. The English translator of the video version, Sr. Bernadette Reis, appears to be caught off guard as she hesitates for a moment before translating the outlandish term, but I am sure Pope Francis will love to talk about sadomasochism today with his friend King, Mohammed VI known for being passionate about this subject.