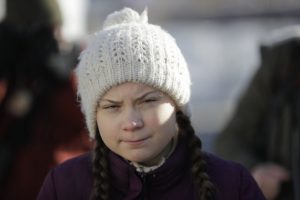 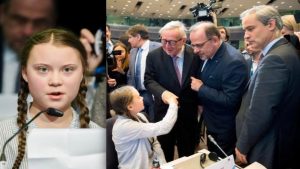 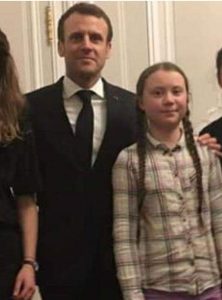 In Europe, in the last few months, we have witnessed the rise of a young political star, a certain Greta Thunberg, a 16-year-old Swedish activist, said to be affected by Asperger syndrome, who looks more like an evil character from a Stephen King movie. Greta, who is obviously being used by the Illuminati elite for their own project of world domination, has inspired a global movement where children are asked to skip school to demand action on climate change.

On the 15th of March of 2019, the International Soros-led youth movement marched around the world demanding action on the climate crisis to the joy of the New World Order, as the marches often morphed from promoting environmentalism, to promoting full-on Socialism.They call them the “Climate Kids” and the leftist media say they are not in the mood to negotiate, so they are basically young ecofascists in the making, just like the one that killed 50 people in New Zealand, who described himself as an “ecofascist” in his manifesto.

Last summer, CNN reported that “A growing number of young people around the world are taking legal action against their governments over the effects of climate change.”

Ecofascism is rising and children are being increasingly indoctrinated by the schools and the leftist media that are helping to promote it. They will use an environmental catastrophe to justify eugenicists  and “population control.” Ecofascism is a theoretically political model in which a totalitarian government requires individuals to sacrifice their own interests for the “organic whole of nature”that will soon rely on militarism, expansionism, and possibly racism to defend their interests that are also the interests of the New World Order.

Throughout human history there has never been an ecofascist government, but the young Greta Thunberg seems to be groomed for her role as worldwide leader of this perverse ideology, crafted by the elite to manipulate the ignorant youth of today.

Last year, we saw how the Parkland pawns were marching for leftist gun control after the horrific mass murder at Marjory Stoneman Douglas High School. Last month, the kids showed up to protest at various Senate offices to hawk the $90 trillion boondoggle known as the Green New Deal. The Sunrise Movement specifically uses kids to advocate ecofascist policies because (A) as one kid put it, “you’re looking at the faces of the people who are going to be living with the consequences,” and (B) it’s always difficult to oppose what kids are saying without looking like an uncaring ogre, but that’s part of this well-orchestrated manipulation game.

Sen. Dianne Feinstein’s (D-CA) now infamous episode that took place at the end of February 2019, showed, for example, how a group of children from the Sunrise Movement used a condescendingly arrogant and grouchy old lady who was clearly pushing back against the rehearsed lines and phony anger of the “Climate kids” to push their agenda. The California Democrat senator Dianne Feinstein faced a lot of criticism from her own party after her response to the teenagers asking for her to support the Green New Deal, filmed by one of the students, began to circulate all over the internet.  Children are being used as propaganda tools by the mondialists, a modality reminiscent of Nazi Germany.

The Nazi Party directed propaganda at children in Nazi Germany between the 1920s and 1945 to influence the values and beliefs of future generations of German citizens, according to their political agenda and ideology, and that’s what the ecofascists of the left are doing today, worldwide. No wonder in her recent interview to die Welt, published three days ago, during the worldwide event, Greta Thunberg, who looks like she could be working for Goebbels the  German Nazi Minister of Propaganda said, “Donald Trump is just a very dangerous fool.” Children are the political equivalent of human shields these days. It’s hard to engage with a politician who’s standing behind an army of teary-eyed children to promote their agenda, but those who are using children this way are no better than the pedophiles, or ISIS military training innocent children, and they need to be exposed. Children in the streets of the United States or around the world throwing temper tantrums because they believe that politicians have failed them should understand that we don’t live in a world of sunshine and rainbows!

2 thoughts to “Ecofacism and the manipulation of children exposed”