The leader of the Russian Orthodox Church, Patriarch Kirill, a close ally of Vladimir Putin, who he described as “a miracle of God”, said that humans’ dependence on modern technology will result in the coming of the Antichrist. Last year the Vatican gave its blessings instead to the controversial “Follow JC Go” game which, as the name suggests, is a riff on “Pokemon Go,” considered by many Christians to be Satanic, that combines technology with evangelization, and the Vatican even launched a Smartphone app for Vatican City,

In an interview with Russian state media, Patriarch Kirill explained at the beginning of January, that he does not entirely oppose technological gadgets, but warned against “falling into slavery” to smartphones. Patriarch Kirill said that the collection of user data including “location, interests, and fears” will make it possible for humans to be controlled by external forces.

“Control from a single point is a harbinger of the coming of the Antichrist,” Kirill told the state-owned Russian television channel Russia-1 TV on Orthodox Christmas Monday.

“The Antichrist is a personality that will be at the head of the World Wide Web controlling the entire human race. Thus, the structure itself presents a danger,” he said with great fear of things to come. The church leader stressed that “if we don’t want to bring the apocalypse closer, there should be no single [control and access] center.” 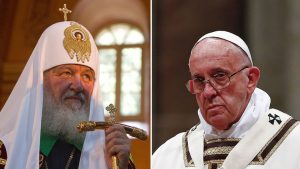 Once more, the Russian Orthodox Church seems to be in line with true Christianity, while the Catholic Church is obviously in the hands of the future Antichrist.

It is apparent to faithful Catholics today, and more so as the past years have demonstrated, some of Pope Francis’ actions and teachings have raised legitimate and serious concerns about the Satanic nature of his mission.

In the Book of Revelation, the False Prophet is mentioned as the Beast from the earth “like a lamb” who becomes the religious head of the false church. The False Prophet “deceives those who dwell on earth.”

Now it is important to recognize before it is too late, that Pope Francis is actually the False Prophet of the Book of Revelation, and the greatest deceiver to on earth, because this Jesuit is the epitome of a wolf in sheep’s clothing perfectly pretending to be that which he is not.