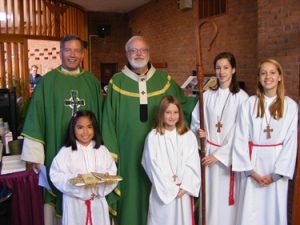 Sean Hannity and Laura Ingraham cautioned of a new threat to Christmas during their programs on Wednesday. An unconventional anti-Trump take on the nativity scene appeared at the Catholic Church of St. Susanna’s Parish in Dedham, a town in Massachusetts, creating worldwide disdain. The Church’s immigration-themed nativity scene features baby Jesus in a cage, put in this way to represent migrant children in cages, and the wise men to represent the caravan of migrants behind the border wall.

For the parish, this insane stand is meant to be thought-provoking. “We try to take a picture of the world as it is and put it together with a Christmas message,”said Fr. Stephen Josoma pastor of St. Susanna in Dedham, adding that themessage this year questions “peace on earth”,since Jesus represents migrant children being held at the southern border separated from their parents.

Well, that sounds like another piece of insane leftist propaganda so let’s find out who Fr. Stephen Josoma really is, thanks to a couple of extracts from an investigation into his openly gay life featured last September in the Boston Catholic Insider :

Way back during Cardinal Bernard Law’s tenure, Irish parishioners at St. Brendan’s in Dorchester were scandalized to see their pastor, Fr. Ron Coyne and his ‘co-pastor,’ Fr. Steven Josoma, openly conducting themselves as a sexually intimate couple inside and outside the sanctuary.  They sought intervention from the Vicar Forane, Auxiliary Bishop, Cardinal Law, and ultimately the Holy See, and when it got to the point where the priests were reportedly simulating the Sacrament of Marriage in the sanctuary to homosexual couples, the parishioners called the Cardinal’s office and demanded the removal of the priests.  After both were sidelined for several years, under Cardinal Sean O’Malley they were reinstated as pastors.

In 2005, Josoma played a part in a skit at a parish event with another gay-advocating buddy (now-former priest, Fr. Bob Bowers). As reported by the Globe, their skit included a joke with sexual innuendo about comparing a part of the male anatomy saying “mine’s bigger”. Fast forward to 2013 when the pastor and parish were in the news again over plans to host a presentation by Austrian dissident priest, Fr.  Helmut Schuller.  The talk was part of a U.S. tour co-sponsored by 10 dissident organizations that publicly disagree with the Catholic Church’s teachings that prohibit homosexual activity, gay marriage, women priests, and married priests. Co-sponsors included gay-agenda-advocates like DignityUSA and New Ways Ministry, as well as Call to Action, FutureChurch, Voice of the Faithful, and Women’s Ordination Conference.  Thankfully, Cardinal O’Malley banned the priest from speaking at St. Susanna’s, saying he would not allow anyone to speak on church property who advocates beliefs in conflict with church doctrine.  (We wish that policy were upheld more consistently, but more on that in a moment).  But why was Fr. Josoma on-board with having such a dissident present at his church in the first place?

Not long after that, in December 2014, Fr. Josoma’s parish featured as a faith formation speaker, Michael Hartwig–a former priest, vice rector and professor of moral theology at Holy Trinity Seminary in Dallas, who was relieved of his duties in Texas when he came out as a homosexual and left the seminary to live with his life partner, the head of the Dallas Gay Alliance.  His name was in the news around a gay scandal at the seminary that hit papers after he left and took a job at Dominican-run Albertus Magnus College. and he was also in the news for having sued Albertus Magnus over their decision to not renew his contract because he represented himself as a former priest when he applied for the job but then revealed publicly in the Dallas Morning News he was actually a priest of the Dallas diocese now on leave(while at the Albertus Magnus living with his life partner).  His topic for the faith formation series was Divorce and Remarriage – Gay Marriage,and the description said, Our theme this evening was to explore the relationship between Jesus’ and Paul’s teachings on marriage and contemporary patterns of marriage and to ask how the Church might advance these ideals in the contemporary context.”

IF YOU ARE INTERESTED IN THE REST OF THIS ARTICLE:

Children separated from families face a higher risk of being trafficked, and many eventually end up sex slaves to priests like Fr. Stephen Josoma who should immediately remove the cage from baby Jesus, and go crawl under a rock because God’s vengeance is coming, even if Josoma frequents Rome often and is protected by the Vatican Gay Lobby and Cardinal Sean O’Malley, who should be ashamed of himself! 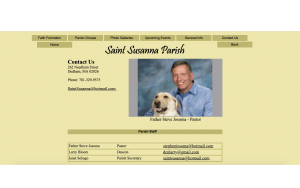