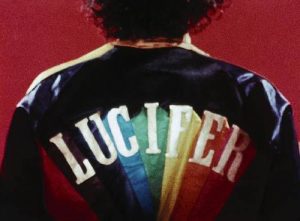 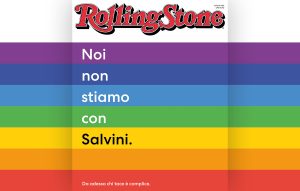 This month’s cover of the Italian edition of Rolling Stone magazine feautures a rainbow and the words: “We are not with Salvini. From now on those who are silent are complicit.”

Complicit in what, saving Italy from the Kalergi plan?

Although the rainbow seems to be only an innocent colored arc of light refracted through raindrops, both Christians and Luciferians alike know its deep occult meaning, and Kenneth Grant who worked with Aleister Crowley once wrote that this symbol is also linked to the corruption, decay and  final dissolution of our age.

According to the Bible, the rainbow is symbolic of God’s everlasting covenant that he would never again destroy  earth with a flood. However, the New Age Movement and Satanists use rainbows to signify building the Rainbow Bridge between man and Lucifer who, they say, is the over-soul.

Rolling Stone has been pushing anti-Trump rethoric from the very first day, underlining over and over again why Anti-Trump Protests Matter, a month ago stating, “President Trump has rendered the Republican party unrecognizable to many Americans,”  This new attack from the Italian edition of Rolling Stone came after Italy’s hardline Interior Minister Matteo Salvini, stated he wants to end migrant arrivals in Italy by boat.

Left-wing hypocrisy at its best becomes once again evident when Rolling Stone asked the usual array of rich liberal musicians, actors, writers and figures related to Italian showbiz and TV if they wanted to take a stand for an open, modern, free and supportive society against the policies of the new government and vice premier Salvini, when he said a couple of days ago during a news conference that “The aim is that not one more person arrives by boat on Italian shores.”

However, Salvini stated immediately afterward that pregnant women, children and refugees will remain in Italy,  showing himself to be quite conciliatory in his approach considering Italy’s immigration has been out of control for years thanks to the previous government controlled by George Soros.

In the meantime, Selvaggia Lucarelli, ex-director of Rollingstone.it wrote that the magazine shouldn’t criticize anybody as they are the worst employers possible, stating that it is a toxic, illiberal, hostile, work environment where many of their own writers and employees don’t even have a regular contract.