A Vatican tribunal on Saturday sentenced Msgr. Carlo Alberto Capella, who originally worked as a prominent Vatican diplomat in Washington D.C. until August of last year, to five years in prison and a fine of about 5,800 US dollars for possessing and distributing child pornography. It is the first time that a Vatican official has been condemned for such a crime.

In April, the Vatican was forced to intervene and arrest Msgr. Capella who worked for the Holy Sees’ Washington Embassy, after Msgr. Capella was exposed by the US State Department for possessing a large amount of child pornography in the United States and Canada.

Monsignor Capella apologized to his family and the Church after being condemned, describing the episode as little more than a “bump in the road”,but how can facts of such gravity about a Catholic priest with an important diplomatic mission on US soil since 2016, be considered only a bump in the road?

The truth is that Msgr. Capella, who was considered until not so long ago an important collaborator of Pope Francis in the US, was an asset of the influential Vatican pedophile ring in Washington. The Holy See, by acting so promptly, prevented his arrest by the FBI and further investigations, that like in the case of Cardinal Pell in Australia, could unveil the direct connection of the Vatican diplomat with the North American Man/Boy Love Association, also known as NAMBLA.

Even if the Vatican says Capella has been held in a cell in the Vatican’s police barracks since his arrest, it can’t really be verified, as journalists do not have access to thesesupposedbarracks.

Monsignor Capella is now described by the leftist  media in Italy as simply a weak man who suddenly found himself alone in Washington D.C. and fell into the trap of pedophilia. However, that’s not what prosecutor Gian Piero Milano initially thought, when he pushed for a much harsher penalty against Capella, who could have been ultimately fined €50,000. The prosecutor indicated to the court the “great”volume of material accessed, saying that the police found on the priest’s mobile phone alone, 40  pedo-pornographicphotos and videos.

Of course, Monsignor Capella can also be considered a necessary scapegoat for the much larger pedophile ring dominating the Catholic Church today so they can regain any credibility lost in front of the eyes of the US president. Let’s remember that in the Bible, a scapegoat is an animal which is ritually burdened with the sins of others, then driven away just like the future Mr. Capella after being defrocked, something that will happen soon after the Congregation for the Doctrine of the Faith makes their own decision about him.

Pope Francis says there is no leniency for clergy accused of child sex abuse, but this is not true, and now people can witness for themselves the great hypocricy from a Pope who sent Capella to Washington to represent him. 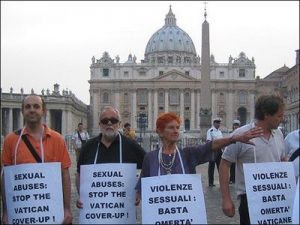