Pop Satanist superstar Katy Perry, who received the National Equality Award at the Human Rights Campaign’s annual galain 2017, and openly supported Hillary Clinton in the US Presidential election the year before, arrived in Rome with her current partner Orlando Bloom,  to meet the Jesuit Pope Jorge Mario Bergoglio, and to attend the Unite to Cure conferencein Vatican City. It’sathree-day event, held on the 26-28 April, that united a wide range of individuals – healthcare, media, and technology experts alongside figures from the entertainment world – to officially discuss how technology can be used to improve the quality of, and access to healthcare.

Katy Perry told fans on Instagram: “Happy Saturday everyone, I’m here in Rome at the Vatican, to speak on meditation. I’m with my momma, my darling [Orlando], and my manager, Steve! It’s a great day! I am so excited!,”

Incredibly, Katy Perry, who inspired  a voter registration campaign from the humor website “Funny or Die,”which features Perry going to a polling station in the nude to demonstrate the ease of voting, and donated in November 2016, a sum of $10,000 to Planned Parenthood,calling on her fans to follow suit, attended the Papal event to speak about meditation, something perfectly in line with the New Age ideology promoted by the Jesuits.

This is truly shocking counting the fact that in March 2018 an 89-year-old Catholic nun who has battled pop star Katy Perry for years over the sale of a Los Angeles convent has collapsed and died while attending court proceedings about the case, according to media reports and supporters. 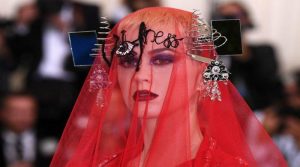 Strangely enough, she and other celebrities who have sold their souls to the devil, end up in front of the Pope.

Dylan and his band performed three songs at the 23rd World Eucharistic Congress in Bologna, Italy in the presence of Pope John Paul II, who sat on a dais off to the side of the stage while Dylan smoked a big fat joint.