Relations between Great Britain and the United States have consisted in the past, of many ups and downs, however this seems to be a moment of great tension, as every day, the Queen grows more and more hostile towards Donald J. Trump together with Her Royal Hypocrisy.

Only a few days ago Justin Welby, the Archbishop of Canterbury, who was accused of “breathtaking hypocrisy” by sexual abuse survivors in September, urged Trump to remove his Britain First retweets, declaring they are un-Christian.

Incredibily enough, the leader of the Church of England is now saying he struggles to understand why evangelical Christians strongly support the US President. While only three months ago, six survivors of abuse by powerful Anglican church figures accused the Archbishop of “silence, denial and evasion” adding that: “The Church of England needs to confront its own darkness in relation to abuse before confronting the darkness of others.”

Hypocricy? The criticism of the decadent Church of England sounds totally out of order, and I am puzzled like many others. The British establishment is a closet full of skeletons, so why keep criticizing and sabotaging Trump, when they are amongst the worst hypocrites in the history of mankind.

The Archbishop of Canterbury is the senior bishop and principal leader of the Church of England, and he is personally nominated by the Queen. Recent inside information given to me by a member of the English establishment, confirms the Queen is upset with president Donald J. Trump for making America Great Again.

Another attack from the Queen’s subjects against US president Donald J. Trump, came earlier this year, when Rupert Murdoch announced Sky will stop broadcasting Fox News in the UK, after 15 years, with The Guardian, labeling it “a right wing channel”. So let’s examine a couple of Royal figures, two eminent representatives of the Royal Family, Prince Andrew and Prince Charles.

In 2015 the Daily Mail wrote that Virginia Roberts, at the time 31, alleged that in 2001 “when she was an underage teenager, she had sex with Epstein’s one-time friend Prince Andrew, the Duke of York.”

At the time Prince Andrew’s friendship with the billionaire sex offender drew scandal and opprobrium, pushing him to quit his role as the British Government’s Special Representative for International Trade and Investment.

Last year Prince Andrew, attracted criticism after saying that a Donald Trump victory in the US presidential election, together with leaving the European Union, would “tear things apart.”

And Prince Charles? Well in May, 2016 the Globe Magazine published a cover stating: “Charles caught kissing boy toy”, and that he has been disowned by William and Kate, and his wife Camilla is demanding divorce. What’s the truth? The front page of the Globe shows a photo of man, resembling Prince Charles, with his back turned to the camera, kissing a young man. 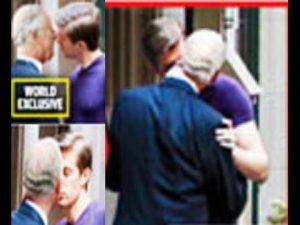 So will Donald Trump receive an invite to Prince Harry and Meghan Markle’s wedding? Well Miss Markle has been an outspoken critic of the Republican party in the past, and in a 2016 appearance on The Nightly Show with Larry Wilmore, the Suits actress described Mr Trump as “divisive” and “misogynistic” demostrating her left wing mentality. Her future mother-in-law is not only reasonably left wing, but secretly supports and finances the mondialist liberal agenda, as the Queen’s personal speculator, George Soros, manages an undisclosed, but sizable portion of the royal funds. The American billionaire became known as “the man who broke the Bank of England” in 1992, when he bet against the British pound and bagged a £690 million profit. The media recently reported that Soros was set to destroy Queen Elisabeth with “offshore scandals” , but that’s just rubbish to make the Queen seem like the victim she is not. Queen Elizabeth II is now the longest-reigning monarch in the United Kingdom’s history, and is also the biggest threat to democracy in the world.