The Pope’s latest confession, “psychoanalysis helped me“, is shocking Catholics wordwide. In a recent book entitled, Politique et société (published by L’observatoire), which will be published shortly in France, the Pope has revealed to the sociologist, Dominique Wolton, that he used to see a Jewish psychologist a few decades ago. However, it is significant and important to remind ourselves that one of the Biblical names of Jesus Christ is “Wonderful Counselor” (Isaiah 9:6). Jesus is the highest and ultimate One to whom Christians usually turn for counsel, and not a Jewish analyst. This is a heresy, and a sign of the times that we are living.

Francis said that he saw the psychoanalyst weekly for about six months, when he was 42 years old. It’s unclear why the Pope specified the analyst’s religion. The full English-language text of the interview is not yet available, so there may be more to add on this topic, in the future. 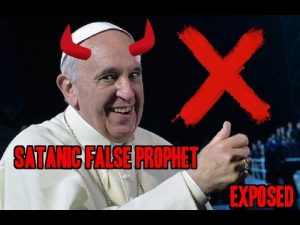 The term “Christian psychology” is a misnomer. It doesn’t exist. The only psychology that a supposed Christian believer needs, is the one inspired by the Word of God. Psychology is the study of the Soul. We read in Hebrews 4:12, “For the word of God is quick, and powerful, and sharper than any two-edged sword, piercing even to the dividing asunder of soul and spirit, and of the joints and marrow, and is a discerner of the thoughts and intents of the heart.”

Modern psychology is based upon the teachings of certain elements within Freemasonry, and the Illuminati that promoted in the last two centuries humanism, atheism and evolutionism. The so-called Christian psychology, is no better than secular psychology, because one way or another, you always end up relying upon man’s wisdom.

A few months ago, Andrew Sullivan said it’s time for journalists to talk publicly about President Trump’s “mental stability.” “To have such an unstable figure, incapable of accepting reality, at the center of the world, is an extremely dangerous thing,” Sullivan said in an interview broadcast on Sunday’s program, “Reliable Sources”, on CNN’s fake news. I don’t think Trump has ever needed, or needs, a neoliberal shrink, to change or manipulate his mind.

Pope Francis is the spiritual leader of Neoliberalism, which embraces the use and abuse of psychology. Neoliberalism only supports individual freedom on the surface, as a fundamental view, when in reality it secretly cultivates demise, by incentivizing insanity, that can then be cured with medication produced by its large pharmaceutical corporations.